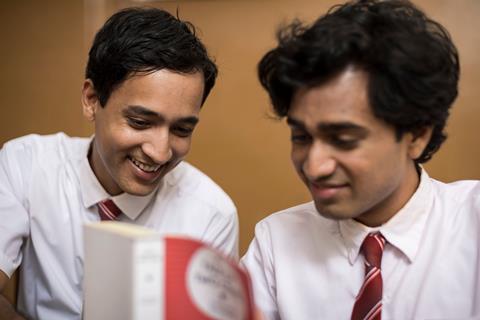 Political trauma and the road to personal liberation make a potent combination – although one painted with approachably gentle brushstrokes - in Funny Boy, a gay coming-of-age story set against the background of the Sri Lankan civil war. Funny Boy is based on the 1994 novel by Shyam Selvadurai, and the author has adapted the novel with Indian-Canadian film-maker Deepa Mehta, someone well practised in counterpointing the public and the private since her trilogy Fire, Earth and Water (1996-2005).

Executed with unsentimental intelligence, integrity and some bracing mischievousness

Distributed by Ava DuVernay’s ARRAY outlet and streaming on Netflix from December 10, this involving, accessible modern melodrama, revisiting the LGBTQ+ themes of Fire, should attract wide viewing beyond Asian audiences. However, its visibility will no doubt further fuel the controversy that has risen about the shortage of Tamil actors in significant roles, something that Mehta has insisted she tried hard to avoid.

Beyond its specific setting, Funny Boy is a story of self-realisation in face of the strictures of culture and family. Homosexuality is still criminalised in Sri Lanka, and the film’s young hero Arjie spends his life under the disapproving eye of relatives – and later, hostile schoolmates – who are quick to spot signs of deviation from approved masculinity. The setting is Colombo, Sri Lanka, in 1974, where Arjie (played as a child by Arush Nand) is growing up with his siblings in the opulent home of his wealthy Tamil family, led by his mother (Nimmi Harasgama), hotelier father (Ali Kazmi), grandmother (Bandit Queen’s Seema Biswas, a long-standing Mehta collaborator). A mock wedding ceremony among the children, with Arjie in bridal drag, shows his delight in testing gender expectations –encouraged by his young aunt Radha (Agam Darshi), a cosmopolitan free spirit who teaches Arjie the self-affirmative motto, “don’t mess with the grand diva” (perhaps anachronistically for 1974, but it will pass).

Radha herself gets her wings clipped when, having fallen for a young Sinhalese man – defying the deep-entrenched hostilities between Sinhalese and Tamils - the family curbs her freedom drastically. She also witnesses an outburst of violence against Tamils, presaging later events. In the meantime, Arjie turns 17 (now played by Brandon Ingram) and attends a posh private school where he clicks with Sinhalese classmate Shehan (Rehan Mudannayake), an urbane Oscar Wilde fan who introduces him to David Bowie and Eurythmics. Tender allies against an oppressive world, Arjie and Shehan fall in love and find release in the haven of the latter’s grandly crumbling mansion, but their idyll can only remain secret for so long.

Eventually the simmering tensions between Sri Lanka’s Sinhalese and minority Tamil populations erupt with the outbreak of civil war in 1983 (as end titles note, it would last till 2009). Mehta shows Arjie’s family facing catastrophe, although the film eschews a too epic dramatisation of conflict. While some may feel that Mehta downplays the reality of events, or cheats us of cathartic spectacle, this reserve feels intrinsic to the film’s nature. Nevertheless, a four-month jump to a coda feels undeniably abrupt.

With films portraying the traumatic passage from happy childhood to the bitter adult reality of political conflict, the shift can be awkward between the rapturous depiction of youth and the later evocation of hate and blood. Funny Boy’s transition in this respect feels that bit more jarring in view of the heightened sunniness of the early sections. Right from the start, DoP Douglas Koch’s vibrant colours and use of an exuberantly free-floating camera evoke a privileged, almost fairy-tale world for young Arjie, despite the problems he faces (the opening beach scenes veer perilously close to holiday brochure gorgeousness). No doubt expressly, the film shows Arjie facing disapproval and suspicion rather than outright castigation, and homophobia in this story is somewhat eclipsed by the anti-Tamil feelings depicted more graphically – and it could be argued that the two forms of hatred become metaphorically equivalent here. But Arjie’s journey to self-liberation certainly looks a smoother ride than is altogether believable in this setting.

Aside from the controversy over casting (lead actor Ingram is part of the Eurasian ethnic group of Sri Lankan Burghers), there is initially something of a credibility gap in the presentation of Ingram and Mudannayake as teenagers. Otherwise, they are candidly affecting as a tender, playful duo, exploring both their desire and their feeling of difference from (and self-consciously dandyish superiority to) those around them. Overall, Funny Boy is sharply acted, with Harasgama particularly imposing as a serious, quietly concerned mother, and Darshi genial as Arjie’s rebel mentor.

A storytelling device that is ingenious at first, but soon feels over-insistent, is the occasional flash insert in Arjie’s childhood of his older self, and vice versa. Funny Boy certainly couldn’t be considered hard-edged art cinema, its mainstream polish arguably helping its harsher content slip down a little too smoothly. Nevertheless, it is undeniably executed with unsentimental intelligence, integrity and some bracing mischievousness.