'Girls Of The Sun': Cannes Review 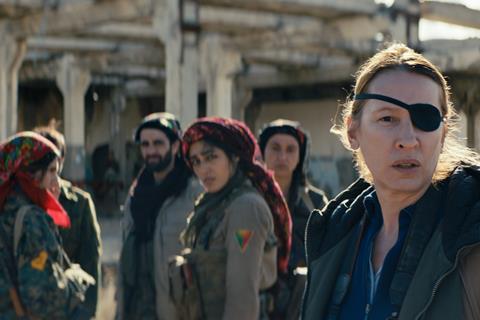 The feminist message is clear and sincere in Eva Husson’s ponderous women’s war movie, which focuses on a battalion of female Kurdish fighters in the front line of the fight against ISIS. A mid-budget mis-fire after the director’s promising indie debut, Bang Gang, Girls of the Sun seems more concerned with staging sisterly bonding sessions amidst the rubble than in developing what might have been an intriguing story – about how war can reshuffle social and gender inequality.

Husson’s surprisingly static drama has a big, theatrical look and high-volume orchestral soundtrack but is lacking in other departments – the story structure being the most problematic.

There’s a scene towards the end where we see the faces of an advance party of Kurdish fighters led by commander Bahar (Iranian actress Golshifteh Farahani) and the war-toughened reporter embedded with them (Emmanuelle Bercot) poetically illuminated by fiery light from the air strikes that their US allies have launched to support their offensive. Any true soldier would have backed away from the windows in a still active battle zone where enemy snipers and suicide bombers are rife – but it makes for a great widescreen array. It’s one small example of the film’s tendency to overstate, to opt for the easy money shot, that undermines our faith in the authenticity of what we’re watching.

Bercot’s Mathilde is a recently-bereaved veteran French photoreporter who lost an eye while covering the battle of Homs, and a war correspondent partner in Libya, but is back for more in Northern Iraq where she has come to write a story about a Kurdish women’s unit. She’s assigned to the battalion under the command of Bahar, whose tragic, faraway look is soon explained by great lashings of backstory, introduced in clichéd flashback mode, that take us back to the abduction of this former lawyer by ISIS militants. Sold into sex slavery like thousands of other Kurdish women, she managed to escape and became a fighter to not only take revenge on her captors, but also to fight for “Women, Life, Liberty’” as the battle song of these ‘Girls of the Sun’ have it.

Husson seems to have decided at an early stage of writing the script that audiences are never going to grasp the difference between Kurdish groups like the PKK, the YPG and the Peshmerga, or the unique place of the non-Muslim Yazidi minority – victims of the Sinjar massacre of August 2014 that initiated the events recounted in the film – within Kurdish culture. Even the town the Kurdish forces are attacking is inexplicably given a name derived from the ancient history of the region, Corduene (it’s clear from the dates that appear onscreen at the beginning that Corduene stands in for the Yazidi town of Sinjar, retaken by the Kurds in November 2015).

Gritty locations and production design put some realism back into the mix, but the director’s decision to shoot for universal values rather than distracting details gives the entire story a soft-focus feel. Bercot and Farahani emote like the great actresses they are, but there’s little to their characters but tragic backstory. And although there are some lyrical moments in the soundtrack by American musician Morgan Kibby, who also scored Bang Gang, her music is randomly applied – the worst offender being a solo piano lilt that leeches all of the tension out of one of a key escape-from-ISIS scene.