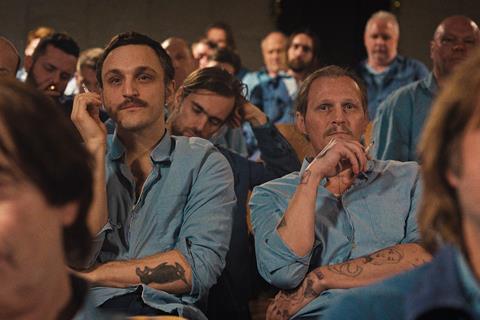 Paragraph 175 was the section of the German criminal code which criminalised homosexual acts between males. Introduced under the German Empire in 1872, it remained on the statute books all through the Weimar Republic, the Nazi era and the Federal Republic that followed, and was only finally repealed in 1994, five years after the fall of the Berlin Wall. Between the end of the Second World War and 1969, when the law was tempered by the introduction of an age of consent, more than a thousand men were imprisoned under the provisions of the clause every year. Many lost their jobs and there were dozens of suicides.

Though it takes a while to build, patient viewers will be repaid with interest

This shocking chapter of German history was the subject of Rob Epstein and Jeffrey Friedman’s 2000 documentary Paragraph 175, narrated by Rupert Everett – though that mainly focused on the Nazi persecution of gay men and women. Austrian director Sebastian Meise turns his attention to what happened after the war in Great Freedom – in a supposedly open, democratic society that had turned its back on totalitarianism. He does so in a slow-burn drama that refuses to take the easy route towards an angry, emotionally manipulative issue film.

While it smoulders with indignation for the injustice that was perpetrated for so many years, Great Freedom is also a love story, a remarkable character study, and an absorbing meditation on what long-term imprisonment for a crime that is not a crime does to the soul. Though it takes a while to build, patient viewers will be repaid with interest by a film that plays absorbing games with historical and subjective time and, among its other qualities, is beautifully shot, manipulating light in ways that sometimes recall the paintings of Vermeer or Rembrandt.

It’s also a persuasive showcase for the acting talents of Franz Rogowski and Georg Friedrich who play, respectively, Hans, a gay man who is jailed repeatedly under Paragraph 175, and Viktor, the tough but deep-down vulnerable lifer he befriends in prison. Rogowski is absorbing because he keeps so much buttoned up in his outwardly mild, inwardly passionate character. His emotions are conveyed more through body language rather than dialogue or backstory – the way he keeps his eyes down but warily observant while stitching sheets in the prison workshop, his naked body curled into foetal self-preservation mode in solitary confinement. We never even find out what he does for a living when not in jail, but he has a talent for love and self-sacrifice – illuminated not only in his rapport with Viktor but through two brief, risky prison affairs.

The title is resonant and ironic in ways that are highlighted by the film’s clever, thematically rich time structure. It spreads across three of Hans’ stints in prison for indecent acts – in 1945, 1957 and 1968 (in the first, he’s sent straight from a Nazi concentration camp to jail to serve out the rest of his sentence). Interleaved, the three passages don’t play out chronologically; we learn to take our bearings from details such as what Hans is sewing (repurposed Nazi uniforms in 1945, pink bedsheets in 1968) and from an inventive use of colour – in one brilliant touch, we see him in 1957 repainting the workshop walls a hue we recall from a previous sequence set eleven years later.

While this unusual time key makes us work to reconstruct the stages of the rapprochement between two men who are poles apart, and the gradual shift of the balance of power between them, its main effect is to suggest that criminalised gay men like Hans were caught in an endless loop of social, moral and judicial persecution that made ‘freedom’ something that could be expressed only in confinement.