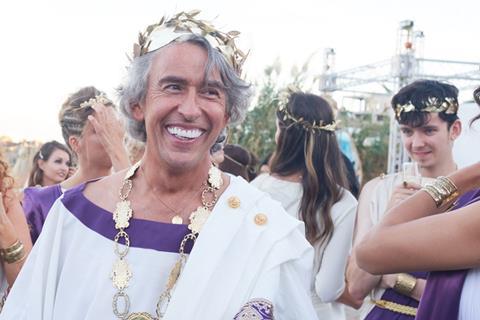 Any resemblance to a living individual is purely intentional in Greed, an enjoyably bilious satire built around the swashbuckling antics of a larger-than-life British retail tycoon. Writer/director Michael Winterbottom delivers a heady cocktail of absurdity and profundity, laced with a generous measure of cutting one-liners in a film that builds into a scathing commentary on a world where the rich keep getting richer and the poor are merely collateral damage.

The star presence of Steve Coogan as Sir Richard “Greedy” McCreadie and the attempt to address global concerns in an enjoyable, thought-provoking fashion could make this one of the more commercial projects from the prolific Winterbottom. Sony Pictures Classics will release in the US and the film will also carry a particular resonance for British audiences attuned to the real-life inspiration for McCreadie and all the local references.

Winterbottom begins with a two-word quote from E.M. Forster’s ‘Howard’s End’ that states “Only Connect”. The entire film is based around joining the dots of McCreadie’s life but also making the connections between individual actions and global consequences.

Greed begins on the Greek island of Mykonos where “King Of The High Street” McCreadie (Coogan) is hosting a lavish party to celebrate his 60th birthday. Among those set to attend are his feisty, formidable Irish mother Margaret (a hilarious Shirley Henderson), his former wife Samantha (Isla Fisher), bumbling, self-deprecating biographer Nick (David Mitchell) and a host of family members and celebrity chums. The theme is the Roman Empire, complete with fake colosseum, purple togas and a real lion. The preparations are chaotic and there is the inconvenience of Syrian refugees who have landed on the beach.

The film is as flashy and brash as its subject. Winterbottom uses split-screen sequences, fake news footage, mockumentary-type interviews with McCreadie’s close associates, period flashbacks and more to create a boisterous profile of a someone described as “a self-made man in love with his own creation”. Coogan captures all the foul-mouthed bluster of a born bully happy to crush anyone who doesn’t serve his grand plan of becoming filthy rich. Companies are bought and sold, individuals hired and fired, shady deals struck, money siphoned off for private use and all whilst staying just this side of the law and finding legitimate means to avoid paying tax.

Winterbottom collaborated on the screenplay with Veep writer Sean Gray and there are some cracking lines of dialogue alongside surprising star cameos. The ending even seems to borrows from the Tarantino book of historical wish fulfilment.

McCreadie may seem a loathsome parasite but he also becomes a symbol of the way the world operates. The film may be guilty of trying to cover too much ground as it takes pot shots at the super wealthy, the bankers who support them, the politicians who are powerless to regulate them, reality television, Brexit and the whole rotten state of the planet.

Yet it somehow manages to make all those connections work and knows when to freeze the laughter. The closing credits are filled with facts and figures about the global inequalities between rich and poor, the vast profits of the fashion industry and the pittance paid to exploited workers in places like Sri Lanka. McCreadie may be an easy figure of fun but Winterbottom also makes us realise that this is a deadly serious matter.