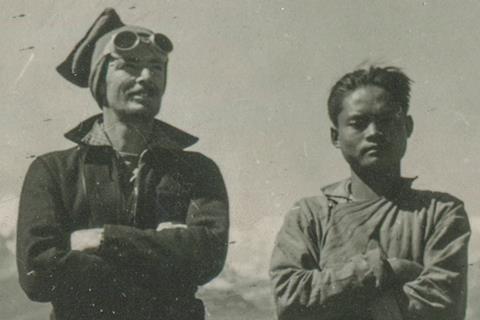 In 1928, a ten-year-old boy from Paisley was given his first cine camera. “The greatest toy a child could ever wish for,” it triggered in Harry Birrell a lifelong passion for film – both watching it, and also shooting his own footage. Harry was also, for part of his life at least, an articulate and engaged diarist. His words, narrated by Game of Thrones actor Richard Madden, and excerpts from the footage he captured throughout his life, are deftly assembled into a documentary portrait of a thoroughly decent man and an absorbing, frequently very affecting personal history of the 20th Century.

With the distance of eight decades, even the most mundane sights and activities take on a loaded significance

The fact that the film won the audience prize after its world premiere at the Glasgow Film Festival gives some indication of its robust crowd pleasing potential. There are parallels with Peter Jackson’s They Shall Not Grow Old – like that film, Harry Birrell Presents offers a glimpse of the quotidian human details of combat, albeit in WWII (Birrell served in India, Nepal and Burma) rather than WWI. But while Jackson’s digital restoration has more polish and technical pizzazz, this film has the unique selling point of Harry’s engaging voice and vision.

The film will show in Scotland later this year as part of the Glasgow Film Festival on Tour programme; the alluring combination of human interest and cinephilia should ensure further festival bookings. A theatrical life is not out of the question; given a similarly supportive push on social media and word of mouth, the picture could match the success of last year’s Glasgow Film Festival documentary break out, Nae Pasaran.

Harry’s granddaughter Carina, who serves as a producer on the project, also appears throughout the film. Her contribution is part of a slightly inelegant framing device which suggests that the cache of Harry’s films, diaries and albums is only now being rediscovered by his family. His archive, stored in 400 canisters stacked in sturdy metal boxes in a shed (it’s a miracle that the whole lot didn’t degrade into dust and damp), is loaded into wheelbarrows and carted off to be explored.

Through Harry’s generous, perpetually curious lens, everything is deemed worthy of documenting. And with the distance of eight decades, even the most mundane sights and activities – a bike ride with some chums, a beach picnic on the Isle Of Arran, a clutter of trams and cabs on the streets of pre WWII Glasgow – take on a loaded significance. A lovely letter from Harry’s mother, to whom he sent regular notes along with his laundry, expresses her sadness that her son, who was robbed of a father by the Great War, now has to deal with the possibility of his own devastating conflict.

With the exception of the present day segments and a few newsreel clips, pretty much everything we see on screen was shot by Birrell, often in colour. While it’s not always slick, the footage is intriguing, quizzical and playful. Birrell used his camera to learn about the world.

Two aspects in particular stand out. The editing, particularly of Birrell’s wartime footage, is first rate – there’s a propulsive energy to this assemblage of home movie clips that transforms it into a thrilling yarn. And perhaps even more crucial is the use of music, a combination of vintage scores by film composer Harry Lubin and contemporary compositions by Ian Dolamore, it fills the film with a swell of optimism which harmonises perfectly with the open, warm personality of the man behind the camera.