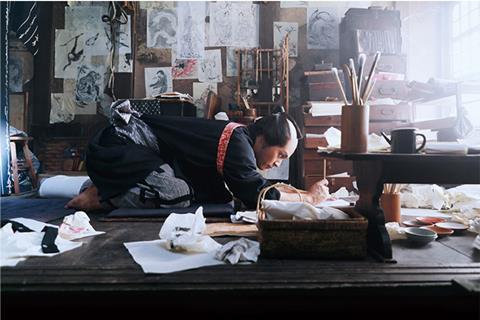 Painting is a political act in Hokusai. Hajime Hashimoto’s insightful biopic of Japanese Ukiyo-e artist Katsushika Hokusai (who painted famous works such as ’The Great Wave Of Kanagawa’) diligently portrays his life and work. It also broadens the canvas to convey an era in which many aspects of popular culture were judged to be “morally corrupt”  and were brutally suppressed.  The subject matter and the bigger perspective should attract audiences who welcomed art films like Renoir (2012) or At Eternity’s Gate (2018).

Reserved and unshowy in style, Hasimoto respects the character and serves the story

Hashimoto divides his portrait into four chapters and cleanly splits the focus between young artist (played by Yuya Yagira) and old master (Min Tanaka). The former is striving to find his voice, while the latter is determined to sustain his creative life into old age. Hokusai was nearing 90 when he died in 1849. The connecting tissue throughout the film is the fight to remain true to yourself.

Hashimoto underlines the subversive nature of art in the film’s prologue with a raid on the premises of publisher and patron of the arts Juzaburo Tsutaya (Hiroshe Abe). Books are burned, paintings are destroyed and stark warnings are delivered. Convinced that he is a great artist, Katsushika Hokusai presents himself to Tsutaya. Yuya Yagira brings a youthful bravado to the role of a hotheaded, immature outsider. His confidence shrinks when he is asked the simple question: “Why do you paint?” and can only reply: “Why should I know? “ An underwhelmed Tsutaya further deflates his confidence by exposing him to the work of successful artist Utamaro Kitagawa (Hiroshi Tamaki) and promising newcomer Sharaku Toshusai (Seishu Uragami).

Much of the first half of the film unfolds in the treacly gloom of the geisha houses, a haven for the commerce of art.  Bright reds and bold blues provide a warm colour palette and the private rooms feel suitably seductive with lush fabrics covered in depictions of peacocks, fanned tails rendered in intricate detail.  The search for his voice takes Katsushika on a pilgrimage out of the city of Edo to the coast. His subsequent pictures featuring tall pillars of frothy waves with Mount Fuji in the distance become his trademark and proudly bear the name of Hokusai.

Any life of the prolific, long-lived Hokusai is faced with the dilemma of what to cover. Hasimoto and screenwriter Len Kawahara make some wise choices in how they shape and focus the potential material. The second half of the film jumps decades to focus on Hokusai’s later years  where the cost of an artistic life is measured in physical decline and loss. The violent death of a friend who had dared to become a writer inspires one of Hokusai’s most brutal paintings, and reinforces the perils of being an artist during the final decades of the Tokugawa shogunate in Japan.

Reserved and unshowy in style, Hasimoto respects the character and serves the story. The film vividly conveys the craftsmanship of the painter’s work from the delicate brushstrokes to the precise carving on the wood block prints. Hasimoto does have a fondness for bursts of wild weather that reflect or influence the emotional state of the characters. Gusts of wind, pelting rain and lightning flashes serve as  dramatic punctuation.

Hasimoto makes his mark when it matters most, generating tension from the violent death of a writer and finding pathos in a fantasy moment when the old and young Hokusai work together, painters in perfect harmony with one distinctive voice.