Truth is stranger than fiction in Ridley Scott’s high-heeled step into the murderous world of Italian luxury goods. 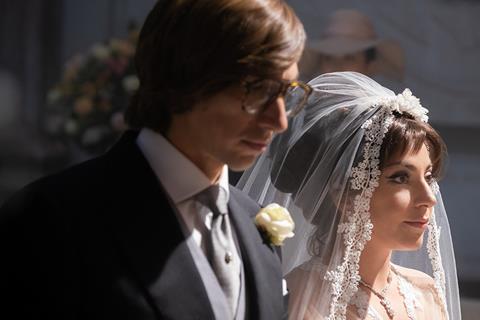 Ridley Scott switches tack abruptly from the masculine medieval machinations of The Last Duel – which only premiered at Venice – to a far stranger place indeed in House Of Gucci, a Milan-set drama also based on (rather more recent) real-life events which fields far more bewildering human behaviour. Then again, it’s fashion, darling: a world unto itself.

The key word here is world: Scott and his team have created a strange place filled with high-end luxury goods and populated by rich, peculiar, larger-than-life people who really existed and did everything the film suggests, and possibly more. Starting with the accents – a full-throttle cast led by Lady Gaga and Adam Driver speaks in English with varying degrees of Italian inflection – Scott’s couture drama invites the audience to take a trip to a lurid place where the tones shift as swiftly as the fortunes of Gaga’s magnetic lead character, Patrizia Reggiani.

As the trailer suggests, House Of Gucci can switch into camp faster than you can swing a bamboo-handled handbag, and will certainly launch a thousand Gaga memes, an element which is accentuated by the random application of chart bangers in the soundtrack. But it’s also unsettling, entertaining, and really quite unusual: like next year’s fashions from a more extreme house, it grows on you. Lured by the cast, which also includes an unrecognisable Jared Leto, a terrific Al Pacino, and a especially-languid Jeremy Irons, self-selecting audiences (Halston fans, etc) should respond positively, even at an over-long 157 minutes – although as everything here is more-more-more, there’s no reason why the running time shouldn’t follow suit.

Lady Gaga, or Stefani Germanotta, the Italian-American performer nominated for her performance in 2018’s A Star Is Born, proves that role was no flash in the pan here. She takes the character of Patrizia seriously: every inflection, every gesture, every minute she is on screen, and the effect ranges from funny to pure pathos. Anyone can google the name and find out what happened to Patrizia Reggiani, but if audiences don’t remember what took place in Milan on the morning of March 27, 1995, House Of Gucci will certainly play better.

Scott’s film, taken from the non-fiction book by The New York Times reporter Sarah Gay Horden, starts on that very day and tracks back – to when Maurizio Gucci (Driver), the pampered, timid son of the patrician Rodolfo (Irons) and grandson of the House of Gucci’s founder Guccio Gucci, first met Patrizia, step-daughter of a man who ran a large trucking company. Severely outclassed and repeatedly underestimated, the perennially gaudy Patrizia married Maurizio, who defied his feuding family to be with her. But she liked shiny things – very much – and soon enough Patrizia would wrangle their way back in, becoming embroiled in the business affairs of a then-dying luxury goods house. (Eventually, Tom Ford arrives on the scene in 1995 to revive its fortunes.)

Patrizia finds a kindred spirit in the the fast-talking Aldo (Al Pacino), brother of Rodolfo, who has ruined the label with cheap licensing deals. Both brothers are old and the overriding question is who will inherit the label? Adolfo’s son Paolo is played by Jared Leto as a delusional sad sack who is inept in all things, particularly design. Guided by the advice of her fortune-telling friend Pina (Salma Hayek), Patrizia pushes Maurizio to take his birthright, but he’ll prove to have a bigger appetite for boardroom backstabbing than she had imagined.

Reuniting with Ridley Scott after The Last Duel, which did him no real favours, Adam Driver is given another difficult role here. Maurizo is a truly strange person, even amongst this cast of oddballs – an indulged, remote man who turns his back on the family business only to find his true, chilly nature again. Working closely with Lady Gaga, Driver pulls off this complex portrayal even while delivering the sort of Italian-accented English which is ripe for parody – but somehow, eventually, works in this weird world that Scott has created.

Jared Leto has fun as Maurizio’s cousin, although it’s odd that a name actor would be cast to be completely unrecognisable – spending four hours in the make-up chair every day to look not like yourself seems like an unnecessary task given he is playing a fairly-ordinary looking man. Al Pacino has the time of his life as the slippery Aldo. There’s fun to be had here, but there’s also some real pathos in all the characters in the middle of this toxic Lifestyles of the Rich and Famous, Milan-style.

Scott shot mostly in Rome (Cinecitta and some exteriors) during during Covid-19, which perhaps accounts for the fact that city locations can look a little emptily anonymous. One set which rings true is the Villa Necchi in Milan as Rodolfo’s luxurious home, where even his lawyer Domenico de Sole (Jack Huston) and housekeepers speak with accents, adding emphasis to the impression that this high-flying luxury world is a bubble that’s unreal to the rest of the world.

Apart from the cast, the main attention here will go to Janty Yates on costumes. It is to be expected that she would conjure up a rare Gucci loafer or suit from that era, but what stands out is how she dresses Patrizia, which is a part of how the audience will read the character. Attracted to everything that glitters and gleams – from Maurizio to Aldo Gucci to the over-large earrings and that extra gold chain too many – she led with her instincts, and they were all wrong.

Patrizia is still alive today, although the production did not speak with her in the making of this. Apart from the fact that she is a convicted criminal, that seems appropriate for a story which in real life was almost too incredible: it’s only on the screen, in Scott’s campily curated, almost fantastical world, that it seems to make some sort of vague, uneasily-entertaining, sense.