‘How It Ends’: Sundance Review

What would you do on your last day on Earth? 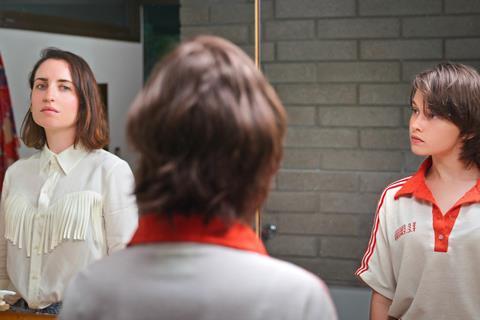 How It Ends offers a quirky, laidback take on a familiar premise: if this was your last day on Earth, how would you spend it? Shot during Covid-19 and incorporating an episodic, occasionally improvisational tone, writer-directors Daryl Wein and Zoe Lister-Jones’ melancholy comedy follows a lonely Angeleno as she walks around the city trying to set things right with family members, friends and exes — after all, an asteroid will obliterate all life tomorrow. Lister-Jones gives a heartfelt performance as this unhappy woman coming to terms with her disappointments, and she’s assisted by Cailee Spaeny as her character’s younger self. But the slim story and wobbly execution ultimately undermine some deft observations about depression, forgiveness and the inner child who needs to be heard.

The presence of the pandemic is apparent both through the social-distance blocking, and the film’s overall attitude that life is precious and that the future is uncertain.

After its Sundance premiere, the picture will court buyers on the strength of its end-of-the-world conceit, and the filmmakers have assembled cameos from a who’s-who of high-profile stars and hip comic actors, including Olivia Wilde, Helen Hunt and Fred Armisen. For potentially bleak subject matter, How It Ends is largely an optimistic endeavour — the end credits reveal that it was “made with love during the 2020 pandemic” — and that novelty should attract indie-minded audiences.

One morning, Liza (Lister-Jones) is in bed when she hears a rap at the window. A young woman (Spaeny) is urging her to get up and seize the day. There’s good reason to do so, considering society has just learned that a planet-killing asteroid will hit Earth overnight. As a result, Liza and her companion — who is actually the metaphysical representation of Liza from about 15 or 20 years prior — opt to say goodbye to everyone in her/their life that mattered. But Liza quickly discovers that her car has been stolen, which means the two women must travel by foot across Los Angeles to complete this emotionally fraught task.

Covid-19 isn’t a reality in Wein and Lister-Jones’ script, but the presence of the pandemic is apparent both through the social-distance blocking — characters speak to each other from across tables or far apart on the street — and the film’s overall attitude that life is precious and that the future is uncertain. (Also, the streets are eerily empty in the middle of this ironically bright, sunny day.) But the introduction of Liza’s imaginary younger self — and the fact that, for unexplained reasons, other people can suddenly see her — suggests early on that How It Ends will be a whimsical, New Age-y examination of doomsday. There’s no mass chaos or grim proclamations: instead, this is a gentle film about a sad person who wants to see if she can fix herself before all life ends.

This odyssey involves Liza and her younger self encountering odd individuals along their path, and these interludes run the gamut from poignant to tedious. They meet a school teacher (Ayo Edebiri) who decides to finally pursue her dream of becoming a stand-up comedian, and later notice a musician (Sharon Van Etten) strumming her acoustic guitar and singing a sweet song for a friend she lost. These unassuming moments are lovely little snapshots into people’s capacity to face darkness with hopefulness and compassion — but they tend to be outnumbered by passages that are overly clever or thinly developed. Too often, one can feel the actors straining for laughs that yield few rewards.

What keeps How It Ends engaging is the interplay between Liza and her younger self, with the filmmakers illustrating how we are always talking to the child within us. The women’s conversations can sometimes veer into the touchy-feely — Spaeny’s character symbolises the unguarded emotional self that Liza has tried to flee — but Lister-Jones is quite adept at portraying someone filled with regrets and pent-up pain. There’s a fragility to the performance, and her warm rapport with her costar believably sets up the dynamic that they’re both actually Liza — each of them trying to help the other find closure.

Unfortunately, despite the actresses’ vulnerable portrayals, How It Ends doesn’t develop Liza enough for her journey to feel memorable or universal. As she meets up with her self-absorbed father (Bradley Whitford), distant mother (Hunt), unfaithful ex-boyfriend (Lamorne Morris) and former close friend (Wilde), each mini-sequence has pockets of insight and tenderness, but they don’t build to a satisfying whole. How It Ends argues that, when the end comes, all we’ll really have is ourselves — it’s a wise, bittersweet notion, but not quite earth-shattering.