In Michelle Garza Cervera’s Tribeca prize-winning feature debut, a pregnant woman with a past has a toxic encounter with the supernatural 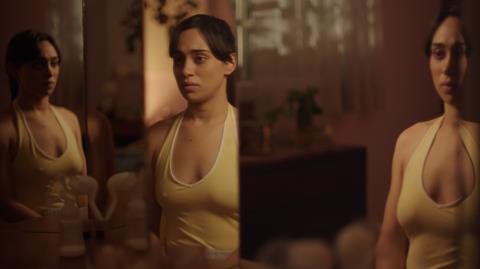 “When you become a mother, you feel as though you’re splitting in two,” the pregnant protagonist of Huesera is told. And in Michelle Garza Cervera’s feature debut, a double Tribeca prizewinner, our heroine feels the full, literal force of that troubling idea.

A nightmare journey through the dark side of motherhood involving gaslighting, body horror, and the occult.

Propelled by a superb central performance by Natalia Solian, the film’s potential excesses are held under tight control as it takes us, like a Mexican riff on Rosemary’s Baby, on a nightmare journey through the dark side of motherhood involving gaslighting, body horror, and the occult. Huesera’s unsettling blend of feminism and horror can expect further festival play, but don’t expect this one to come anytime soon to an antenatal clinic near you. Wih XYZ handling international sales and Garza Cuevera winning best new narrative director and the Noras Ephron prize at Tribeca, international interest is assured.

The early scenes chart the anxiety of Valeria (Solian) and kind but bland Raul (Alfonso Dosal) as they hope for parenthood, including visits to a huge monument of the Virgin Mary to ask for help. Eventually their wish will be granted, but not before we see how Valeria might not be the perfect mother that she has presumably been pressurised into becoming. As her toxic family reminds her, she is lacking a maternal instinct, having once dropped her sister’s child down the stairs while babysitting; she has a rebellious punk musician past (presented in lively flashback, and featuring some terrific raucous songs) which she is now finding it hard to reconcile with a tedious middle-class future; and she has unresolved feelings for her former lover Octavia (Mayra Batalla). All that is left of the old Valeria is a guilty puff on a cigarette with one arm hanging out of the window.

Under the stress of all this, Valeria starts having visions of a female creature which, in the first of the film’s punchy jump scares, throws itself off the opposite balcony and breaks its legs before looking up straight into her eyes. It starts to haunt her, setting on fire the cot that Valeria has been making, amongst other things. (This creature is Garza Cervera’s update of Mexico’s Huesera myth, in which a spectre roams the desert, collecting buried bones so that it can inhabit the body of someone living and liberate them from their torment: it’s not hard to see where this is leading.)

What gives much Latin American horror its force is that what some would merely dismiss as the ‘supernatural’ is experienced by the characters, who have been asked to believe in extraordinary things since childhood, as literal. This is the case for Valeria who, as Raul looks on sceptically, has to deal not only with the stresses of impending motherhood and her own past, but also with the weight of that potent hybrid of the sacred and the profane that is religion in Mexico. Solian does well, in a performance that becomes increasingly demanding as things advance and as the ever-fragile Valeria becomes increasingly isolated, to make the viewer endure all this along with her. Only during the extended final sequence does the film seem to lose its all-important grip on credibility.

Valeria is surrounded by a (perhaps too) wide range of well-played characters, most of whom seem to take great pleasure in making her feel bad, among them sister Vero (Sonia Couoh) and mother-in-law Norma (Anahi Allue). In one authentically unsettling scene — perhaps the key element in Huesera’s methodical dismantling of Mexican family values — Valeria is forced to revisit her babysitting nightmare.

The visuals make copious use of standard horror tropes, among them spiders in unexpected places (“a spider’s house is also its prison,” someone says, one of several moments of clunkily explanatory dialogue) and unsettling nursery mobiles, whilst throwing in several extra-disturbing details for good measure, including the huge, scary eye inside Valeria that stares back at her when she first looks at her baby’s ultrasound.

The soundwork stands out, with the breaking of bones very much at the forefront; viewers who flinch at the sounds of knuckles being cracked, as Valeria is prone to do under stress, will reach the end of Huesera in tatters.