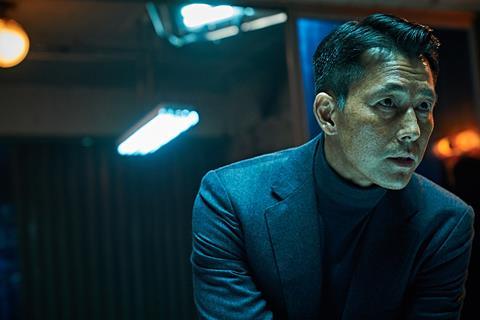 Certainly not without ambition, Kim Jee-woon’s adaptation of Hiroyuki Okiura’s 1999 animated feature Jin-Ro: The Wolf Brigade contains moments of stylistic brilliance through some compelling set-pieces. Yet moving the story from Japan to a Korean peninsula which is on the point of reunifying in 2029 results in a film which is both over-plotted and melodramatic.

Currently on commercial release in Korea, the film is struggling to compete with Mission: Impossible – Fallout despite a high-profile cast that includes Gang Dong-won, Han Hyo-joo and Jung Woo-sung. It has taken only $2.4m since July 25, a low figure for such a summer tentpole directed by the man responsible for The Age Of Shadows. Illrang will bow internationally in competition at September’s San Sebastian Film Festival before hitting Netflix, which has acquired global rights (except Korea) to the film. Ultimately, the streaming service seems the best home for Kim’s feature, which is based on a small cult hit but targeted at a mainstream audience.

The Wolf Brigade opens by detailing a geopolitical backdrop in which the two Koreas are left with little choice but to reunify following tensions in the region between China and Japan which also entangle the US and Russia. A five-year plan to bring the country back together is announced but meets with opposition from both neighbouring countries and the US, resulting in sanctions including a blockade on oil. These destroy the Korean economy, causing wiidespread unrest.

All this gives birth to an anti-reunification terrorist group called The Sect, which uses young suicide bombers to cause destruction. An elite police force known as the Special Unit is launched by the provisional unified government to counter terrorism, causing internal rifts in the security services. Amidst this power struggle is the relationship between Joong-Kyun (Gang Dong-won), a member of the special unit scarred from an incident known as “Bloody Sunday” where 15 schoolgirls were mistakenly shot, and his colleague Yun-hee (Han Hyo-joo), the older sister of a girl known as “Little Red Riding Hood”.

They soon find themselves in the middle of a battle between powerful institutions as rumours begin to circulate of a secret “Wolf Brigade” emerging within the ranks of the Special Unit.

Other major characters in the convoluted narrative include Jin-tae (Jung Woo-sung), a training officer and effective leader of the Special Unit, and Sang-woo ((Kim Moo-yeol), a former colleague of Joong-Kyun and now a deputy director at the national intelligence agency.

Other than the change in setting, what distinguishes Irrang from Jin-roh is the focus on melodrama that becomes more pronounced as the film progresses, seemingly in an effort to try and pull in local viewers. Even though internal divisions and power struggles in law enforcement are the source of most of the tension in the film, it doesn’t offer any more depth in terms of geopolitical insight than that which has dominated much of the news over the past year.

In terms of casting, it’s the female supporting roles that leave more of a mark with Han Ye-ri as a member of The Sect, and Shin Eun-soo as “Little Red Riding Hood” playing small but significant parts. The leads are adequate, but can come across as bland.

Nevertheless, Kim’s style, while not quite as polished as his other features including The Age of Shadows, will remain a draw for international audiences. In particular, an exhilarating sequence set in one of Seoul’s most popular tourist destinations, the Namsan Tower, stands out and the scenes which take place in the sewers below the capital, The Sect’s hideout, are equally engaging. Kim’s noirish vision of the Seoul metropolis - reminiscent of A Bittersweet Life - makes up for some of the film’s shortcomings.