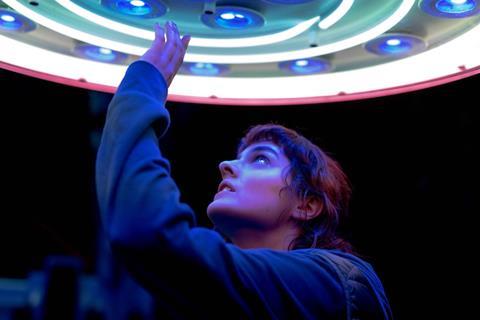 An attention-grabbing debut, Zoe Wittock’s Jumbo lightly clambers on board a never-seen-on-the-screen-before fetish/disorder – ‘objectophilia’, the sexual desire for/obsession with inanimate objects; in this case, an awkward, disturbed young woman who falls passionately in love with a fairground ride in a film “inspired” by a real-life story. That’s the tagline which will provide the clicks and notice for Wittock and her young star Noémie Merlant (Portrait of a Lady On Fire), bringing to mind the prospect of dripping oil and cheerfully greasy, whirly orgasms. This is no Crash, though, and viewers looking for something more penetrative on the topic may be in for another wait.

Wittock has neatly sketched out her subject and a groovy neon palette for scenes involving Jumbo “himself”, but the story and general characterisation remains broad and thinly developed in this WTF Films-sold Sundance World Cinema debut. Its 94-minute running time – including credits – speaks to Jumbo being such a sliver of a film. But few go broke over-estimating the public’s fascination for kinky sex and this could be a brisk festival performer (anyone attracted by the ‘artistic’ prospect of sex with a fairground ride is unlikely to complain that the film only has one such tastefully-shot sequence).

Jeanne cuts a difficult central character and her onscreen depiction isn’t helped by the fact that this troubled teenager is being played by a beautiful actress with a bad haircut and a lot of exaggerated mannerisms. Her brassy single mother (Emmanuelle Bercot, enjoying herself) is overbearing, with an inappropriate sense of personal boundaries. Worried about, or perhaps fearful of, Jeanne’s sex life, mum jokes loudly about orgasms and vibrators – and that’s long before Jeanne starts to show more than a professional interest in a local fairground ride where she works the night shift as a cleaner.

Passing reference is made to Jeanne ‘not being normal’ long before she took this job, but the character is only presented in present time, sitting alone in her room tinkering with models and wires and masturbating over plugs and spanners (the film’s opening sequence). The haircut and baggy clothes she wears are an attempt to disguise Merlant’s clear natural beauty, but that’s somewhat undermined by the script’s nudity requirements. More disappointingly, though, Jumbo never spins far past its premise: an intense young woman is sexually attracted to an inanimate object, her mother is horrified, her quasi-boyfriend Marc is dismayed. Can they learn to accept her for who she is?

Wittock has fun with ‘Jumbo’ himself, (real name: ‘Move it’). And Jeanne’s walk of shame, covered in oil, is certainly amusing. (The money sequence involves a spreading, alien-like oil on a Kubrickian white background, a contrast to the simple point-and-shoot aesthetic of the rest of the feature.) Certainly bright – all those flashing lights make it look like Close Encounters Of The Third Kind – and ultimately very breezy, Jumbo makes a claim for people to enjoy love wherever they find it, even though there’s obvious consent issues involved on the part of this most hard-working of fairground rides.