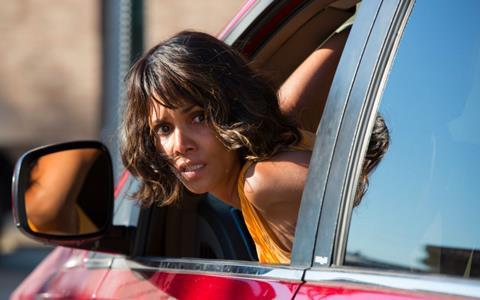 Delightful pulp without a hint of subtlety or shame, Kidnap takes a cultural truism — that a mother would do anything to protect her child — and makes it the grist for a rollicking action-thriller which is as as concise as it is ludicrous. Holding the whole enterprise together is Halle Berry, who gives a compellingly committed performance as a panic-stricken, fierily determined woman on a mad chase after the shadowy individuals who abducted her boy. To be sure, Kidnap is unadulterated B-movie nonsense, but when it’s delivered with this level of trashy gusto, the pleasures are plentiful.

Berry’s visceral, sometimes hysterical performance is so forceful that one tends to go along with Kidnap’s gleeful absurdity

Opening August 4 in the US, Kidnap will hope to find the same audience that turned out for another low-budget Berry vehicle, the 2013 thriller The Call, which grossed about $69 million worldwide. Her new film is so over-the-top it’s often cheesy, but that may work in Kidnap’s favour, especially if word of mouth starts spreading about what a silly/scary romp it is.

Berry plays Karla, a single mother in New Orleans who dearly loves her young son Frankie (Sage Correa). But during an outing with her boy, she steps away to take an important phone call, only to look up to see that Frankie has been nabbed by two criminals (Lew Temple, Chris McGinn) who shove the scared child into their car and speed off. With her cell drained of its battery, Karla has no choice but to hop into her minivan and give chase.

Director Luis Prieto (who helmed the 2012 remake of Pusher) and screenwriter Knate Lee do a lot with a thin but gripping premise, following breathlessly as Karla drives after the kidnappers on the freeway, frantically trying to figure out how to get help or slow the criminals down. Consequently, Kidnap plays out like a classier version of a schlocky exploitation picture, generating urgency from its child-in-crisis narrative.

Because Prieto tends to crank the intensity to an absurd level, Kidnap risks becoming risible at every turn. This, however, becomes the film’s secret weapon: As overheated as this cat-and-mouse game becomes, Berry’s visceral, sometimes hysterical performance is so forceful that one tends to go along with Kidnap’s gleeful absurdity.

Never winking at the camera, the Oscar-winning actress brings just enough pathos and grit to the role that no matter how ridiculous Karla’s actions become — by film’s end, she’s almost Rambo-esque in her fight skills — we believe that she has risen to the challenge simply because she is desperate to keep her boy alive. As a result, the absurdity begins to take on a knowing, unapologetic fervour — the more smashed-up Karla’s minivan gets as she continues in hot pursuit of the kidnappers, the more sublimely preposterous and riveting Kidnap becomes.

At 82 minutes, including end credits, Kidnap blessedly doesn’t overstay its welcome or introduce any needless subplots or thematic depth. Much of the film consists of a long car chase, and Prieto ably navigates some muscular story beats within that sequence. There aren’t any spectacular action scenes in this low-budget offering, but Kidnap does boast some solid stunt work — not to mention taut pacing from editor Avi Youabian — that give the proceedings a hurtling forward momentum. That’s crucial considering that the dialogue tends to be rudimentary — essentially, a series of expository placeholders as Karla tries to keep up with the people who have stolen her child.

Eventually, Kidnap slows down once Karla arrives at the bad guys’ secret lair for a final, violent showdown. Perhaps wisely, the filmmakers don’t bother explaining the kidnappers’ plan, reducing them to broadly cretinous white-trash villains who can serve as any parent’s worst-case scenario of all the unknown evils out there in the world. Temple and McGinn knowingly play up their characters’ snarling, primal uncouthness. But even when the film gets off the freeway, Prieto and Berry invest their story with enough surprises and scares to keep viewers invested. Kidnap chronicles in frenzied detail the most horrifying day in Karla’s life. But for most audiences, it’ll just be a hoot.