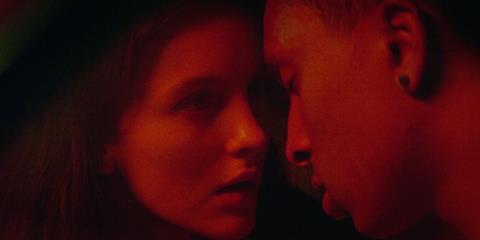 A young woman battles her own nightmares and local thugs in Kissing Candice, a film in which director Aoife McArdle lurches around the language of the music video in a stylish feature debut. Coming of age in a depressed and dreary everytown on the Irish coast is the subject of this story with resonance for Ireland today. Candice (Ann Skelly) is cocky and vulnerable, a girl in the grip of seizures that blur into the chaos and lawlessness around her.

A script built more on image and atmosphere than on language,

Skelly’s impressive performance won’t get crowds to storm the box office – every country has its own films about marauding gangs who abuse innocents - yet she and director/writer Aoife McArdle should attract attention for more ambitious projects in the future. In a script built more on image and atmosphere than on language, Skelly (a TV actress making her feature debut) plays a girl of 17 trapped between an angry policeman father and the toughs who are terrorising her neighborhood where a young boy has gone missing.

John Lynch, who plays her life-hardened dad, states the point: “Things were a lot better during the Troubles. Now their mad f…ing sons have the run of the place.” McArdle is from Omagh, a town in Nothern Ireland’s County Tyrone which suffered the most murderous attack in the istory of the Northern Ireland conflict after the Good Friday agreement was signed.

The film unfolds as a series of outbursts, whether they are the mysterious seizures that Candice suffers or attacks from the gang that careens a car through the streets. The film is built on images that evoke the director’s background in commercials (an Audi Super Bowl ad) and music videos, including U2’s Every Breaking Wave (2014).

Kissing Candice is an example of Irish filmmaking that skirts the roots of a literary tradition, eschewing extended dialogue and the language-bound conventions of the theatre. To use a musical parallel, it’s more groove than melody or lyrics. Jon Clarke’s pounding score fits that bill.

Given that approach, the director is fortunate to have a young actress like Skelly whose face conveys an emotional complexity that can sustain long close-ups. Amid the violent action, McArdle varies the rhythm with those long observant takes, as if she’s trying to challenge the limits of the short music video format.

The film carries plenty of influences. Among them is the young Danny Boyle, as seen in the tactile camera, red-tinted filter, and throbbing music. Another presence that haunts Kissing Candice is Stephen King, who is called to mind in Candice’s seizures, in an ambiguously possessive cop father and in the self-destructive bullies who prey on her family.

In the cast, Ryan Lincoln, a young man who seems to emerge from one of Candice’s hallucinations, is a softening presence and a buffer between her and the gang. In this visual theme and variations, which can be dazzling, we have a stirring self-advertisement by a deft emerging image-maker. McArdle is certainly that. With more of a script, her visual fireworks could be more of a film.