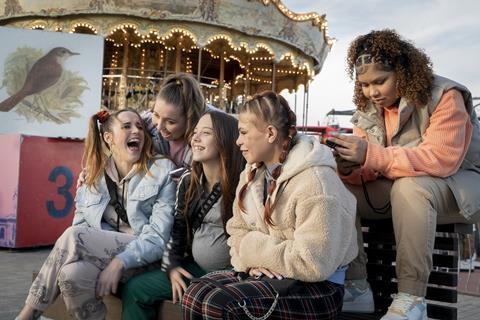 In her multiple award-winning 2020 debut Schoolgirls, Pilar Palomero showed that she’s an expert in turning a group of youngsters hanging out into compelling cinema. Now she does the same thing in La Maternal, updating and downshifting into an exploration of life in a Barcelona home for pregnant teens while taking things to a whole new emotional level.

Superbly directed by Palomero, who seems to have a special gift for seeing the world through children’s eyes

Driven by a breathtaking turn by Carla Quilez that ranks as one of the strongest recent performances by a Spanish actor of any age, La Maternal is partly a psychological X-ray of motherhood, and partly a celebration of it. Its main aim seems to be simply to communicate – with the minimum of dramatic fuss and the maximum of authenticity – exactly how it feels to be a young mother; no small feat, and one to which festivals will warmly respond following its San Sebastian premiere. A Spanish release is planned for November.

We learn much of what we need to know about 14-year-old Carla (Quilez, one of the few professionals in the film) from an early scene in which she breaks into a posh house and smashes a lot of glass, giggling all the while. Zooming dangerously on her bicycle along with her best friend Efraim (Jordan Angel Dumes), Carla means business. Stubborn, rude and clearly loaded with anger issues, she’s the daughter not only from hell, but of Penelope (a superb Angela Cervantes), who runs a rundown roadside bar. Penelope is far more interested in her boyfriend Chispas (Pepe Lorente) than she is in Carla, who spends long hours at home alone. Theirs is the very definition of a love-hate relationship.

On the upside, Carla is also fiercely defensive of Efraim: that she’s a richly textured creation is clear right from the start. What’s not so clear is whether we’ll actually ever come to like and respect her; miraculously we will. When she gets pregnant by Efraim, Carla enters a residence for teens in her situation and things take a turn for the Ken Loach as one by one several real-life young mothers, all non-actors, recount the unhappy experiences that have brought them here. Not a trace of self pity or indeed sentimentality is to be seen here, nor anywhere else in La Maternal.

When one of her new friends has her own baby, Carla is jealous of it: this is the emotional journey of someone who is supposed to move overnight from being the archetypal teen rebel to a maternal pillar of society in a matter of months. The complexity of that journey is handled with exemplary nuance and tenderness, and the quietly humorous exchanges between Carla and Penelope are understated and supercharged at the same time.

Most of the drama of La Maternal is thus not occurring at the level of plot, but of psychology; specifically Carla’s. She cannot understand why, when she hugs it, talks to it, and dances for it–she’s a terrific dancer—her baby keeps on crying: it must, she concludes, deliberately trying to make her angry. It is painful to witness her struggling to negotiate emotions she can’t possibly be prepared for, and more painful since La Maternal makes us feel them too.

Since the focus is exclusively on such truth-telling, no fingers of blame are being pointed, no big statements about the society’s evils being made. The only suggestion that something may be responsible for teen pregnancies comes in the very first scene, a prelude as Carla and Efraim watch pornography together over their phones. But once that brief moment of social polemic has passed, we move to full submersion in Carla’s world.

Superbly directed by Palomero, who seems to have a special gift for seeing the world through children’s eyes, Quilez is in virtually every scene and is compelling in each, as she learns to break down the protective barriers she has built up to replace them with a new understanding for the equally fragile, damaged Penelope. This will be the key to Carla’s own success as a mother.

Though not quite qualifying a feature/documentary hybrid—there’s far more feature than documentary—hand-held camerawork remains the default choice for this kind of fly-on-the-wall piece, pulling us as far as it can into the intimacies of these girls’ lives, aided by controlled pacing and editing. The result is a journey that is as emotionally rewarding for its audience as it is for its young protagonist.