'Lady Of The Lake': Busan Review 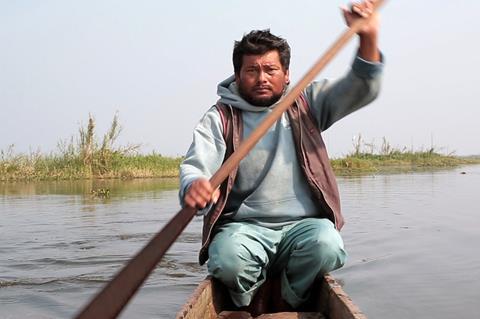 For his first narrative feature, filmmaker Haobam Paban Kumar returns to the location of his documentary, A Floating Life. In the north Indian state of Manipur, near the border with Myanmar, Loktak lake is home to a fishing community which lives – literally – on the water. Floating island masses of vegetation, known as phumdis, are lashed together and on them, the lake dwellers have constructed shanty homes. The backdrop to this slight supernatural tale is the real-life intervention by the government in 2011, which saw homes destroyed and destitute villagers forcibly relocated.

The use of sound is evocative, not least because this is one of the quietest films imaginable

The insight into this remote community and a way of life which is critically threatened is perhaps the main selling point of the film. As such, Lady Of the Lake will generate curiosity on the festival circuit. Prospects outside of the festival microcosm are less certain: the languid pacing, while it reflects the pace of life of the villagers, makes for a glacial viewing experience.

The film opens with striking shots of burning shacks. The government has intervened and destroyed the homes of the fishingcommunity they blame for polluting the lake. The home that Tomba shares with his wife has been spared, for the time being, but the fisherman is depressed to the point of catatonia by his powerlessness. Long scenes pass with Tomba, sitting motionless on the empty fertiliser sack they use for a rug on the floor, while his wife tries to chivvy him out of his inertia.

Then Tomba finds a gun. His demeanour changes. He is empowered by the weapon but the change in his personality is not for the better. He becomes more bullish and confrontational. Meanwhile, his wife’s reaction to the gun is visceral horror. She recoils and begs him to get rid of it, predicting, correctly, that only bad things can come of it. Tomba argues, “This gun will save our souls.”

It’s around this point that Tomba is disturbed on a nightly basis by the sound of someone visiting his shack. “It’s probably a cat,” his wife mutters, annoyed at being woken. But Tomba clutches his gun and listens warily. The visitor, a woman in a white scarf, returns each night like a threat.

The film has something of Apichatpong Weerasethakul’s blend of quotidian details with a heady sense of enchantment, although this is more low-key on every level. The use of sound is evocative, not least because this is one of the quietest films imaginable. The sound, out of frame, of the government’s boat-mounted mechanical diggers, destroying the homes of the lake dwellers, is a jarring assault on the almost oppressive silence and stillness of the water.

The conclusion of this fable has both a symbolism and a shock value which is slightly unexpected next to the understated restraint of the rest of the film. Kumar could, however, perhaps have pushed this contrast further, with a more dramatic closing scene which repays the patience of the audience during the longueurs that precede it.