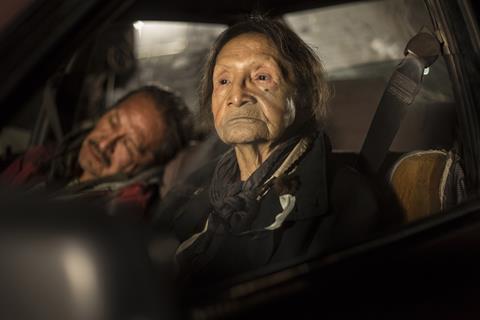 The struggles of one stoical, careworn family illustrate the plight of countless Native Americans in Babak Jalali’s third feature Land. His portrait of those set apart from mainstream American society feels as plaintive as a howling wind on a lonely prairie. The measured pace and flinty, low-key storytelling could win critical support, but they are the very qualities that will make Land a tough sell commercially. Further festival exposure seem a more realistic possibility.

The director of Frontier Blues and Radio Dreams, Iranian-born Jalali has now turned his attention to America. Land is set in a dusty, fly-blown no man’s land near the Prairie Wolf Indian Reservation. Alcohol is forbidden on the New Mexico reservation, so every morning Mary Denetclaw (Wilma Pelly) drives her son Wesley (James Coleman) to a nearby liquor store where he spends the day sipping beer until he reaches oblivion. An early shot offers a long close-up on Wesley, whose battered, bleary-eyed countenance has long ago embraced defeat. He seems indifferent to his surroundings or circumstances, even as a trickle of urine starts to flow down his trousers.

The film is permeated with misery. Mary’s son Raymond (Ron Rondeaux) is clean and sober, working diligently on a cattle ranch. Her youngest son Floyd has just been killed in action in Afghanistan and the family are awaiting the return of his body. Their troubles only ever multiply as Wesley is attacked and hospitalised.

Distinguished by its thoughtful handling of the subject matter and committed craftsmanship, the film is undermined by its rather suffocating solemnity. The sense of hard lives with few options makes the film challenging. Dialogue is sparse, the pacing can feel ponderous but Jalali does allow a blink of hope at the end of this long, dark tunnel of despair.

The film creates a potent sense of a bleak backwater as the sound mix accentuates the whistling wind, munching cows and quiet of endless, unvarying days with little possibility of change. There is a nod to Ennio Morricone and the western genre in a musical score punctuated with howls and squeals and making expressive use of the sad songs of the late Townes Van Zandt. Agnes Godard’s cinematography captures the piercing, bleached light of the landscapes. There may be vast open spaces here but the long, lingering close-ups on individual faces suggest the way people are trapped, unable to escape their fate or the weight of history that continues to crush their spirits.

Nothing is entirely black and white in Land; Mary is still a believer in her family, there are hostile white residents nearby but also those who offer the hand of friendship and there are Native Americans, like Raymond, who take a stand against a constant process of emasculation and commit to making themselves the architects of change. The hard-won balance that eventually emerges and the small steps towards change combine to save the film from becoming an entirely glum study in neverending desperation.