Scenes from a marriage 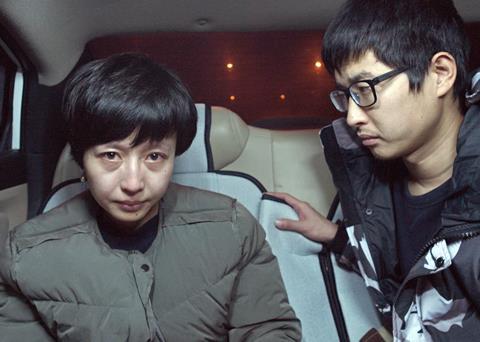 Close confinement provokes bitter conflict in Love Poem, a documentary hybrid where hell is other people. The second feature from director Xiaozhen Wang (2013’s Around That Water) relentlessly picks over the bones of his fraught relationship with his wife and reluctant accomplice Qing Shi for a film that constantly muddies what is real and what is staged. The result is an unsettling journey through a hall of cracked mirrors. Festival audiences could be drawn to the originality and challenge of a film that is as intriguing as it is exhausting.

This overwrought therapy session feels very real. We then question whether any of it can be taken at face value

Love Poem initially seems to have taken inspiration from a combination of Noah Baumbach and Jafar Panahi, but without the Sondheim song. Xiaozhen Wang and his wife Qing Shi collect their young daughter Xiaoshuo and drive out of the city to visit an elderly relative. Xiaozhen drives and a fixed camera gazes on the back seat where Qing sits with their child. The journey has barely begun when the adults start giving each other hell. Over the next uninterrupted twenty minutes, they taunt each other to the point of a divorce.

Age-old grievances are aired, blows are struck and words are spoken that might be the cause of regret. Qing is increasingly angry as she vents her resentment of her passive/aggressive husband’s many failings. He is lazy, irresponsible, has never changed a nappy in his life or lifted a finger to try and improve their prospects and build a better life for the family. She also turns increasingly violent. Over the course of the film she repeatedly slaps him, spits in his eye, gouges his face and furiously kicks the back of his seat. Her physical violence is matched by his emotional cruelty.

This overwrought therapy session feels very real. Emotions run high and the viewer is completely swept into a marriage that cannot possibly survive. You even fret over the fate of a greedy daughter who is going to be awfully sick after her endless consumption of seaweed snacks and lollipops.

It gradually becomes apparent that all is not as it first appears. The blistering fury that Qing Shi unleashes may have some basis in reality but it is being channelled at the behest of her husband for the film that he is masterminding. We then question whether any of it can be taken at face value.

Xiaozhen increasingly goes out of his way flag up that this is a version of their life. There is a discussion about acting and doubts as to whether they may be exploiting relatives for an emotional pay-off. Xiaozhen laments: “I went too far to make this film.”

At the halfway mark, a title appears saying this is A Film By Xiaozhen Wang. Breaking that fourth wall and drawing attention to the artifice becomes an increasing element of the process. In the second half, the couple meets on a freezing cold night that happens to be Qing’s birthday. Xiaozhen is in the driver’s seat and Qing is a passenger. A fixed camera attached to the car is positioned to let us see both of them as they enact another scenario in which Xiaozhen is debating the impact on his girlfriend - played by Qing - of telling her that his current partner may be pregnant.

We are now presented with a more reasonable couple. When concentration lapses, they decide to repeat the whole sequence again. Their difficuties and weariness seep into the film as it starts to lose momentum. Can we really invest in any of this when none of it may be real? Does the end justify the means of their George and Martha-style play acting? You feel as if the warring couple may well deserve each other and start to sympathise with a tearful Qing’s desire for it all to end. The final irony comes when Xiaozhen dedicates the film to “my dear wife”.

Part of the Burning Lights Competition, ‘Love Poem’ plays in www.visionsdureel.ch between April 25 and May 2