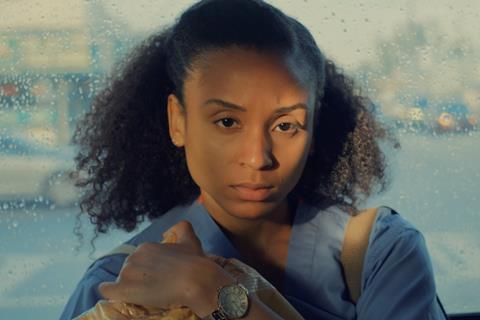 Chasing the American Dream is a bruising, wearying pursuit in Ludi. Actor turned director Edson Jean’s debut feature offers a sincere account of a hardworking, Haiti-born nurse struggling to build a new life in Miami. A sympathetic central performance from Shein Mompremier helps the slight material blossom into a touching, small scale slice of life drama. Further festival attention should follow a world premiere as the opening night presentation of the 2021 Miami Film Festival and a later showing at SXSW.

Best known as the writer/director of the television series Grown (2018), Edson Jean continues to root his work in Florida. Ludi is a nurse who works all the hours she can and misses the family she left behind in Haiti. A regular delivery of old-school cassette tape recordings keep her up to date with the family news and requests for financial assistance. She is surrounded by those trying to take advantage of her good nature or those who feel that they know better than her. Bus driver Julien (Plus Pierre) advises her that she really needs to find a man, have babies and keep Jesus in her life.

Jean tends to strongly favour close-ups in his framing and interiors for his settings. This creates a claustrophobic feel to the film but may also be a reflection of the way Ludi is increasingly hemmed in by her circumstances and carrying everything on her shoulders. There are a few welcome moments of relief capturing the bustling streets, fruit stands and murals of Miami’s little Haiti neighbourhood adding flavour and context to Ludi’s daily life.

The plot flirts with contrivance but has a wry twist up its sleeve and effectively builds a sense of Ludi being pushed to her physical and emotional limits. Told that she needs to ease up and relax, Ludi replies: “Resting is for people who work for themselves.”

Conniving bosses, manipulative colleagues and demanding relatives all add to the pressure. Success St. Fleur Jr makes an impression as Ludi’s fast-talking, incorrigible fellow nurse Evans and Kerline Alce provides comfort and sympathy as nurse Marie. The performances throughout suggest that one of Edson’s strength as a director is his ability to work with actors.

Ludi’s need for extra shifts ultimately forces her to break her contract and accept lucrative work in private care. Everything comes to a head during an overnight shift spent at odds with fiercely independent, cantankerous elderly patient George. A feisty turn from Alan Myles Heyman makes George the kind of impossible man who would test the patience of a saint. Pitted against each other in a stubborn battle of wills, the two of them gradually reach a truce. It is George’s angry frustration at his vulnerability that prompts Ludi to question her own priorities.

Shein Mompremier’s appealing, understated performance carries Ludi. She creates a believable portrait of a woman whose good heart and best intentions have created a yoke for her own back. Her realisation of this lends a modest film the quality of a nicely structured, satisfying short story.