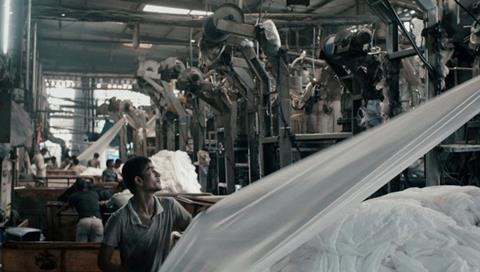 On the surface, Machines sounds like a throwback to the dry-as-dust era of industrially sponsored documentary filmmaking as director Rahul Jain captures a portrait of life in a cavernous textile factory in the Indian province of Gujarat. The reality is a well-observed film that doesn’t celebrate the connection between man and machine but exposes unregulated working conditions straight out of the Victorian era.

Machines ultimately develops into a plaintive eye-opener that confronts difficult questions without providing easy answers. It should travel extensively throughout the festival circuit and find support among specialist distributors with a commitment to documentaries with a social conscience.

Jain’s debut feature dispenses with music or voice-over narration to focus on the sights and sounds of a vast textile factory that starts to assume the nightmare quality of something from a Fritz Lang silent epic. Sound is especially important as we hear a symphony of industrial production composed of whirring machines, hissing steam, clattering looms and belching furnaces.  Health and safety concerns are non-existent. There is little sign of proper sanitation in a soggy, squalid factory where men and boys work backbreaking twelve hour shifts creating acres of the most beautiful fabrics.

A scarf or cloth is all the protection these workers have against fumes and damp. The title may be Machines but there is precious little sign of automation. The real machines here are human as the men stoke furnaces, drag huge vats of chemicals, pull looms, push, shove, carry and keep everything running smoothly. They are paid the equivalent of $3 per shift.

A western viewer instinctively sympathises with this human suffering and wonders why such places still exist in the 21st century. Jain is not prepared to make things that easy either for himself or the viewer. Interviews with workers at the factory capture a sense of stoical pragmatism. The men have bellies to fill and families to raise. “God gave us hands to work so we have to work,” declares one. The notion that the factory is a camp that runs on slave labour is dismissed by the workers themselves. One of them goes out of his way to explain that he does not feel exploited and is not being forced to work in the factory. This is just the disease of poverty and there is no cure.

Jain doesn’t go in for hectoring or finger-wagging but just lets the situation speak for itself. One lengthy sequence observes a young boy at work who literally cannot stay awake. One man explains the futility of workers uniting in search of better pay and conditions as anyone who dares to emerge as a potential union leader is killed. There are no hardship funds, no annual bonuses and no holidays.

Seeking to elicit more than tears and sympathy from the viewer, Jain ends the film surrounded by a group of workers claiming that it isn’t enough to observe their predicament and walk away.  “You just come here, look at our problems and leave”, they declare. “ Tell us what to do,” demands another, leaving this quietly compelling film with an an uncomfortable challenge for anyone who watches it.