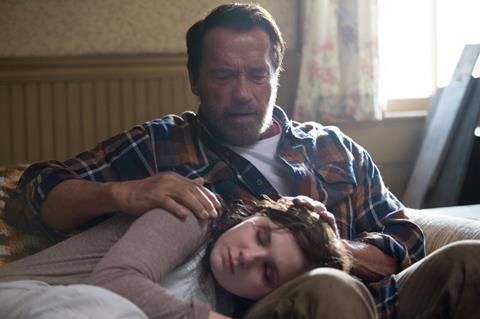 Arnold Schwarzenegger is back - in Maggie, a low-budget zombie film set in the American heartland. The man who fought Martians and Democrats is now battling against the destiny of a zombie teenage daughter who is a terminal case.

The surprise in Maggie is Abigail Breslin, playing a teenager who flares and burns with dread as she becomes aware of the horror of her infection. For a zombie film, her performance delivers real emotion which is rarely seen in this genre.

Much of the public is sure to view Maggie as a novelty project for the man who once ruled the world box office (and may do so again, when Paramount’s Terminator Genysis hits screens on July 31). Schwarzenegger has a huge international following, so a burst of foreign interest for this title should not come as a surprise.   There should also be crossover potential for reaching the young audience who will watch anything about zombies on VOD. Slight and unduly solemn, Maggie should not be ruled out - Maggie was originally set for a Toronto premiere in 2014 but moved at the last minute after Lionsgate picked it up, and it will benefit from the studio’s domestic support.

As the American heartland reels from the toll of an infectious plague that wreaks havoc with zombie symptoms, Maggie (Abigail Breslin) is one of the afflicted. Her father, bearded Wade Vogel (Schwarzenegger) takes her out of the hospital where the infected are brought to die in wards that sound like leper colonies. The paterfamilias brings her home to a farmhouse where his wife (Joely Richardson) is struck with fear.  As the infection worsens, the drama heats up.

Evoking zombie pictures, alien stories, and the more recent epidemic panic thrillers, British first-timer Henry Hobson isn’t out to make his film appetising -Maggie is scratching at her open sores when we first encounter her. Zombies who approach the farm property are dispatched messily by Wade with an axe, a weighty homage to Conan the Barbarian.  In what might be a pitch to the conservative audiences that the film seeks, Schwarzenegger is never far from a weapon.

The former California governor, who once found camp in almost everything, plays Wade with a deeply earnest passion. The character isn’t so much a father as a monument, as Hobson cuts to and from reaction shots of a man with wrinkly skin and a grizzled beard and a house that’s under siege from zombies and cops. Schwarzenegger is no doubt out for a shot of gravitas in this role, yet the unremitting film shows how unaccustomed he is with a dramatic story that involves interacting with what is supposed to seem like a real family.  This is not the part that will win him the Lifetime Achievement Oscar.

The Austrian actor’s accent is another problem. Schwarzenegger’s lines are kept to a minimum, yet there are moments when the audience will struggle to understand what he’s saying. His vocal chords are the only muscles that Schwarzenegger seems to have neglected. It’s already a stretch to accept the premise that this muscular Austrian would be stuck in the middle of nowhere as a plague ravages the US.

The surprise in Maggie is Abigail Breslin, playing a teenager who flares and burns with dread as she becomes aware of the horror of her infection. For a zombie film, her performance delivers real emotion which is rarely seen in this genre. She ends up overshadowing the Terminator in a role that, while over the top, isn’t played for its boilerplate melodrama. If there’s any chilling fear in the film, she delivers it.

DP Lukas Ettlin succeeds in making a house in fields in the countryside outside New Orleans look like a generic Midwestern rural landscape, where zombies are the most threatening wildlife. Interiors, however, are ominously dark. So are the skies over the action. The palette, which gives the cast a death pallor and turns scenes to a near-monochrome, loses any subtlety that one might find in the ambience of mortal decay.

The well-meaning Maggie won’t push Schwarzenegger into retirement and it will help push Breslin into the spotlight.  Like it or not, Schwarzenegger will be back again.