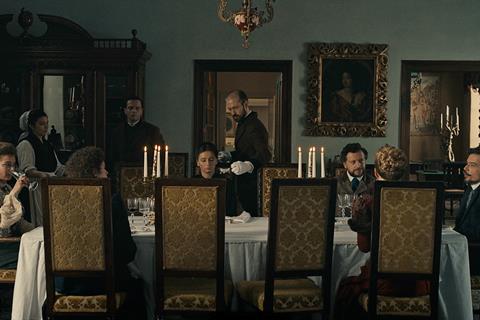 A pioneer of the Romanian New Wave (2005’s The Death of Mr Lazarescu), Cristi Puiu heads into puzzling new territory with Malmkorg, a gorgeously mounted but militantly cerebral conversation piece. Based on a work by 19th-century Russian philosopher Vladimir Sololyov, Malmkrog largely involves five people discussing God, war, good, evil, death and despair for over three hours, mainly in French. Malmkrog is certainly uncompromising – as is the Berlinale’s choice of it to open Encounters, the new festival sidebar designed to highlight cinematic innovation. But while a highbrow hardcore may revel in the experience, for most viewers Malmkrog will feel like being locked in at the Sorbonne over a winter weekend. Handsome production values notwithstanding, Malmkrog’s commercial prospects will be as elusive as its ultimate meaning.

This austere cine-symposium feels like an artistic blind alley, and one that recklessly presumes an audience of committed chin-strokers with a preternatural attention span

Arranged into six episodes, Malmkrog is set around 1900 in a rural mansion in midwinter, the action apparently taking place over a single day, Christmas Eve (the title, never referred to, is the German name for the Transylvanian village Malancrav). The host is the urbane Nikolai (Frédéric Schulz-Ricard), the others include Ingrida (Diana Sakalauskaité), the wife of a general who departs early on, and Olga (Marina Palii), a religious young woman seemingly related to an elderly gentleman who spends the film bedridden in his room.

The discussion warms up on themes of love, God and war, with Ingrida reading out a nightmarish account of violence in battle. As the day progresses, the topics shift to current affairs, with ‘Franco-Russian’ guest Edouard (Ugo Broussot) pronouncing on the destiny of Europe in irreducibly supremacist terms that apparently reflect, among other things, Solovyov’s own virulent anti-Chinese convictions. Later, at dinner, the unstoppably voluble duo of Edouard and Nikolai give an extended masterclass in fin de siècle mansplaining. Throughout, the terms of debate extend from the esoteric (a digression on Prince Vladimir the Monomachos) to the dandyish (“I’m thinking of a Chinese dictum related to me by our friend the Ambassador”).

Apart from the talk, almost nothing happens, although what does is enigmatic to a fault: notably, a sudden outburst of chaos that seems to have no tangible consequences. We also get two further glimpses of the snowbound landscape shown in the magnificent prelude, offering a too-brief respite from the prevalent claustrophobia. Hinting at some ominous background meaning – interpretable as the advent of a violent new century, and the collapse of these people’s world - Malmkrog feels as if Visconti at his stateliest had contrived a rarefied reworking of The Exterminating Angel.

The acting is admirable, especially given the long takes and marathon monologues, and the execution is meticulous: Tudor Panduru’s photography, by day or night, is painterly and august. There’s also a teasing subtext at work in the way that the servants glide around performing their finely choreographed duties almost silently, ignored with lofty oblivion by the guests - their moments, especially in Episode II, bringing sporadic infusions of cinematic intensity. But for all its directorial mastery, this austere cine-symposium feels like an artistic blind alley, and one that recklessly presumes an audience of committed chin-strokers with a preternatural attention span.