The third YA Maze Runner episode finally puts the franchise, if not the audience, to sleep 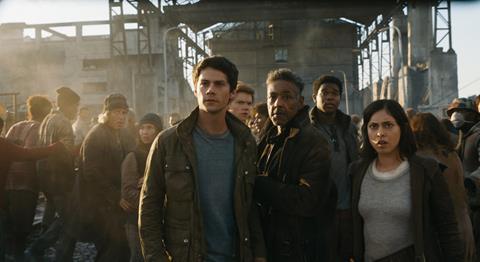 Over three years lie between the release of Maze Runner in September 2014, the sequel Scorch Trials a year later, and the final instalment in the trilogy, Maze Runner: The Death Cure, which opens globally through Fox from the end of January 2018. That may not mean a lot to most people, but it’s a quarter of a lifetime for the target audience. Delayed after lead actor Dylan O’Brien was injured during shooting, Maze Runner: The Death Cure arrives in a Star Wars-led commercial galaxy where Young Adult dystopia franchises seem so 2012. As with the Divergent series, The Hunger Games, and the mother of them all, Twilight, they tend to play to diminishing returns as the tween audience grows out of a desire to watch yearning young actors tell each other “I’m not leaving without you!” before aspiring to a chaste kiss.

Patricia Clarkson and Aidan Gillen provide half-hearted evil as the faces of the corporation, although this won’t be high on either actor’s resume.

Directed, like the first two films, by Wes Ball for 20th Century Fox,  Maze Runner: The Death Cure spends a paralysing 142 minutes tracking a gang of chemistry-free “teens” (O’Brien is 26 years-old) as they save each other from a sinister corporation called WCKD (not an alcopop, although that’s a thought) and hordes of zombies they call Cranks. Patricia Clarkson and Aidan Gillen provide half-hearted evil as the faces of the corporation, although this won’t be high on either actor’s resume. The first Maze Runner notched $348.3m in worldwide theatrical gross; the second took $312.3m a year later; expect further diminished returns as the franchise puts itself, and viewers, to sleep.

Shot in South Africa, Maze Runner: The Death Cure reunites its cast of original actors, who have left their back-story in the Maze long behind for life on the run from WCKD. Here, they about-turn and launch an all-out assault on the corporation’s big-city HQ, highly fortified to keep out the Cranks. Original star Dylan O’Brien leads, with Brit actor Thomas Brodie-Sangster as Newt. Scorch Trial characters Giancarlo Esposito and Rosa Salazar (good) also return. A  large slab of Maze Runner: The Death Cure, revolves around a series of daring rescues of the character Min-ho (Ki Hong Lee) who, when he is eventually found, has precisely nothing to contribute to the film; he is the YA McGuffin personified.

Once in the city, turncoat Teresa (Kaya Scodelario) turns up in the lab, working on an antidote to the Crank virus, while outside the gates a better-known character from the first show is blatantly resurrected (but can’t be advertised as it’s a “surprise”).

The thin story plays out in a hail of bullets, zombies and action-laden sequences (choppers, trains, explosions, with Ball’s particular fondness for winching large items up in the air in plentiful evidence). It appears that if the WCKD corporation had bothered to bloodtest the teens before they went into the Maze three shows ago, none of the action would have taken place, but perhaps that’s just wishful thinking.

Tech credits are appropriate for the genre and budget, although the stock-heroic score from John Paesano stands out as being a particularly numbing contribution.

Screenplay: TS Nowlin, from the novel by James Dasher