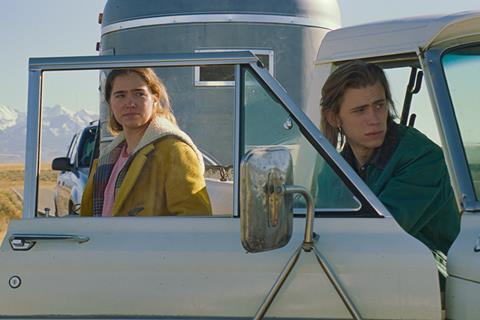 The gentle modesty of Montana Story belies the emotional wallop of this study of a sister and brother returning home to face a dying father and an unresolved past. Although writer-directors Scott McGehee and David Siegel are working with a conventional setup, they invest it with such specificity and deep feeling that the film radiates a lived-in grace. Haley Lu Richardson and Owen Teague are both excellent at conveying everything that remains unsaid between these estranged siblings, eschewing melodramatic flourishes for stoic insights.

Screening as part of the Toronto Film Festival, the picture benefits from its widescreen 35mm lensing which both captures the beauty of the Montana landscapes and hints at the characters’ spiritual isolation. Montana Story is McGehee and Siegel’s first feature since 2012’s underrated What Maisie Knew, sporting a relatable premise that could help it connect with indie audiences. And Richardson’s rising star will only further boost visibility.

As the film begins, pensive young twenty-something Cal (Teague) has just driven in from out of town to visit his family’s sprawling ranch in order to see his widowed father Wade (Rob Story), who has suffered a stroke and is now in a coma. Wade is cared for by nurse Ace (Gilbert Owuor) and housekeeper Valentina (Kimberly Guerrero), but Cal must handle his father’s looming bankruptcy and sell off some of the property’s assets, including the family’s beloved 25-year-old horse Mr. T.

What Cal wasn’t expecting is the arrival of his older sister Erin (Richardson), who ran away from home at 18; her whereabouts a mystery ever since. If anything, she’s even less happy to see her father than Cal is, but the news of his serious medical condition has finally brought her home.

In pictures as different as the dark thriller The Deep End and the domestic drama What Maisie Knew, McGehee and Siegel have demonstrated a fascination with how family dynamics play out — the messier the better. By their standards, Montana Story is a fairly straightforward narrative, populated with plainspoken characters who tend toward the reserved, and the filmmakers (with a few exceptions) don’t force the dramatic fireworks.

As one might expect, Erin and Cal will work through some lingering old hurts, bringing to the surface buried resentments that have long festered. But although Montana Story’s trajectory isn’t particularly novel, McGehee and Siegel infuse each understated moment with authenticity, pushing past cliche to locate the tensions between these siblings and the animosities they feel toward their father. But the eventual revelations prove less seismic than the earlier interactions between Erin and Cal — especially when she refuses to go along with her brother’s plan of getting rid of Mr. T. At the film’s most moving, we simply observe these two siblings tentatively trying to reconnect and Cal learning where his sister has been for the last seven years.

Teague infuses Cal with a stiff, mournful air, playing him as the reluctantly dutiful son who seems trapped between active rebellion and staying relatively close to home. (One senses his jealousy that his older sister skipped town and never looked back, although her reasons for fleeing are complicated.) As for Richardson, she’s a marvel: Erin is both guilt-ridden and strong-willed, proud of the fact that she left but also cognisant that she, in a sense, lost her brother by running away. The two actors must perform a delicate dance — hinting at the siblings’ still-evident bond but also showing how the years apart have frayed it — which they execute with quiet poignancy.

Hell Or High Water cinematographer Giles Nuttgens allows the picture’s wide-open spaces to have a mythic poetry without resorting to merely shooting pretty sunsets. And despite the supporting characters not being especially fleshed out, Owuor and Guerrero give them resonance. Ace and Valentina are on the margins of this drama, but they offer valuable perspective to Erin and Cal; not to mention help keep the film from becoming too much of a chamber piece. Even if the story’s eventual tearful recriminations don’t quite live up to what came before, the sense of bruised but resilient love that permeates the proceedings is impressively wrought. There’s a lot of compassion and heartbreak within this seemingly flinty tale.