In a dystopian Japan, a single woman attempts to find a partner and avoid the persecution of society 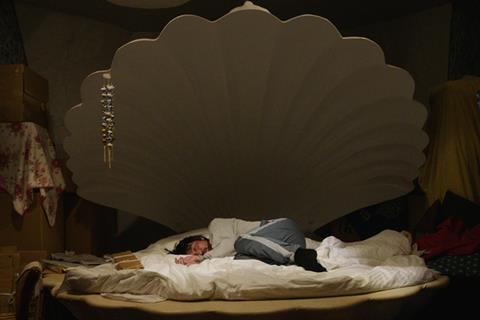 Youth is wasted on the young in Mr. Suzuki - A Man In God’s Country. Backed by Japanese crowdfunding platform Motion Gallery, Omoi Sasaki’s ambitious debut feature is an oddball confection of dystopian drama, tentative romance and barbed social satire set in a land marked by blind loyalty, state oppression and a yawning divide between the generations. Brimming with ideas and inspirations, it is an imaginative brew that could prove to be an acquired taste beyond festivals.

There are echoes of Aldous Huxley and George Orwell in Sasaki’s vision of a brave new world where a population of happy, shiny people live in awe of their Oz-like leader God. A bar code on every arm provides a stark reminder of the Nazi camps. God has not been seen in public for 20 years, but he remains a model of beauty and all that is good in the world. The greatest glory for any citizen is to have a family. There are few things worse than being childless and single.

Middle-aged Yoshiko (Asako Ito) is childless and single, and starting to feel her days are numbered as a caretaker at the Group Home Utopia. She is facing the possibility of military service when a stranger called Mr. Suzuki (Norihiko Tsukuda) arrives at the home. Her immediate instinct is to secure a marriage license.

Mr. Suzuki brings some comic energy to the depiction of a world reliant on unthinking obedience. To an outsider, it might seem more like North Korea than Japan. Bland politicians have an endless supply of exhortations for the general populace. A group of old ladies at the Utopia serve as a Greek chorus of comic relief as they chide, criticise, break into song or demand attention. The picture of a society in which the young are indulged and the old despised, couples celebrated and singles chastised also has an echo of Yorgos Lanthimos’ The Lobster.

The mysterious Suzuki has arrived at the Utopia after a bike accident. Yoshiko gives him sanctuary and puts him to work. Everyday things are a complete novelty to him. As he chops vegetables, carries out chores and displays his musical talents, it is as if an alien has landed in their midst. His true identity doesn’t feel like a big mystery.

Sasaki brings a bone dry tone to the proceedings with his fondness for static camera shots and deadpan humour. Comedy may dominate but the sense of paranoia finds expression in a sprinkling of unsettling scenes where the bad behaviour of an unthinking younger generation is pushed to the forefront, or a crowd mentality starts to hold sway.

An unblinking, implacable Asako Ito makes a persuasive claim on our sympathies as Toshiko and the bewildered, bedraggled Norihiko Tsukuda has the convincing air of a creature that has just emerged, sleepy-eyed from the safety of the burrow. They provide the human threads through an odyssey that increasingly shifts from the comic to the sinister.