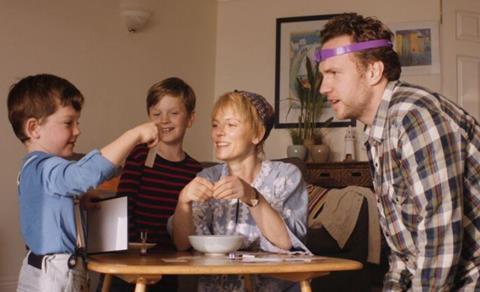 “A mother’s life lessons to the husband and sons she left behind” runs the strapline on St John Greene’s bestselling memoir, first published in the UK by Penguin Books in 2012. And audiences in the market for a touching – if rather soft-edged – cancer weepie featuring Rafe Spall and Emilia Fox should emerge suitably satisfied by Niall Johnson’s affectionate, efficient, enjoyably unremarkable big-screen translation, the debut feature from British production, distribution and sales company Studio Soho.

Much of the action is winningly soppy

A muscular marketing campaign will be required to connect the film to its natural domestic audience – a broad swathe of Middle England that correlates weakly with high-frequency cinemagoers. Funding, reveals the latest version of the book, comes courtesy of Irish philanthropist and motivational speaker Derek O’Neill, credited as co-executive producer.

Like the recent A Street Cat Named Bob, Greene’s story came to light after early attention from local media caught the eye of a literary agent and then a major UK publisher. In Greene’s case the hook was his assembling of “Mum’s List”: scraps of advice, thoughts and fond memories, left on notes or sent as text messages by his wife Kate in her final weeks as she succumbed to cancer. The 78-item inventory helped Greene as he grieved his loss while keeping a brave face for the family’s young sons Reef and Finn.

Following similar contours to the literary source material, Mum’s List unfolds in three timelines. In the present, newly widowed St John (Rafe Spall), aka Singe, pieces together the list while solo parenting his two boys (brothers William and Matthew Stagg). In the recent past, we follow the trajectory of Kate (Emilia Fox) and her family after she’s diagnosed with breast cancer. And depicting events 20 years previously, Singe reminisces how as a teenager (Ross McCormack) he met Kate (Sophie Simnett) a week shy of her sixteenth birthday, quickly becoming soul mates for life who love each other “acres and acres”.

Adding further poignancy to this bitter-sweet tale is the revelation of an additional back story: Reef’s diagnosis with a rare cancer of the abdomen, aged 18 months, when he was given just a six per cent chance of survival. The family’s endurance of this traumatic calamity informs Kate’s sanguine approach to her own misfortune – “Not the worst news I’ve ever heard,” she tells the consultant on hearing her diagnosis.

Much of the action is winningly soppy (pirate-themed birthday celebration, ahoy), and given the tragic arc of the story, writer-director Johnson (Keeping Mum) has not found it necessary to juice it up with dramatic conflict. While this presents Reef and Finn as two of the sweetest, most consistently well-behaved children one might ever hope to meet, and Singe as the world’s nicest dad (Spall’s everyman likeability amply to the fore), few in the audience are likely to protest the spoonfuls of sugar helping the medicine go down.

Kate’s list is similarly cute (“Always kiss boys goodbye and goodnight”), although some items (“Would like Reef to learn recorder or guitar, Finn the drums and electric keyboard,”) reflect a rather optimistic view of parental influence.

Perhaps in a bid to broaden relatability, Johnson’s adaptation is short on specifics. The characters speak with West Country accents and live near the seaside, but only the closing credits reveal that the family resides in Clevedon, Somerset. Nor is it clear what Singe and Kate do for a living (in actuality, he’s a qualified paramedic and lifeguard who set up a company teaching adventure sports), or that they spent their twenties backpacking across the world. Since the film depicts real people who lived real lives, and in fact incorporates many of the Clevedon community as extras, the omission of these details seems counter-intuitive. Maybe it’s to help protect the anonymity of the two boys – surely, at this stage in proceedings, an unlikely prospect.

Screenplay: Niall Johnson, based on the book by St John Greene with Rachel Murphy