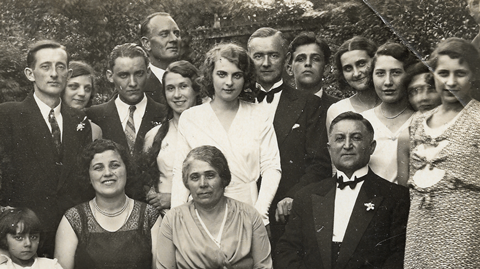 Family history is a dangerous business in My Dear Spies. Vladimir Leon’s painstaking attempt to unravel the stranger-than-fiction mystery surrounding his grandparents shines a light on a shadowy world of Cold War intrigue, secrets and lies. The result is an intriguing detective story poised somewhere between television’s Who Do You Think You Are? and the novels of John Le Carre. It should make a comfortable fit for documentary channels.

The tale begins in Paris as Leon confronts a battered old suitcase. It is two years since the death of his mother Svetlana and only now does he feel able to examine the contents. It may help him understand ’family mysteries’ that have intrigued him since childhood.

He shares the contents of the case with his older brother Pierre. There are family photos, diaries and journals, but no real resolution to the question of whether their grandparents might have been Soviet spies.The fact that the family was deported from France in March 1948 and declared “politically dangerous for the state” seems like a fairly major clue. However, this was a moment when, in Churchill’s words, the ’iron curtain’ had descended across Europe. Wartime ally Russia had become the enemy and it might not have required much for Soviet exiles to no longer be welcome in France.

Leon imparts a substantial amount about the lives of grandfather Constantin and grandmother Lily. We learn of their choice of France as a land of exile in the aftermath of the Russian Revolution and Constantin’s work in Boulogne-Billancourt at the Renault factory which is described as a “hotbed of spies”. Lily’s social activities include a close involvement with the Union Of Soviet Citizens.

Everything the brothers think they know leads to further questions. If Lily and Constantin were spies why was their return to Russia spent in a modest backwater in Kirs? Why was their perfect famly cover not used in further espionage work abroad?

The search for context, understanding and hard facts rather than vivid speculation forms the basis of the brothers’ quest as they follow a trail of evidence from Paris to Kirov, Moscow and back. We see them in hotel rooms mulling over possibilities, visiting archives and libraries, meeting with childhood friends of their mother who had moved back to France in 1975. It is the equivalent of trying to piece together a jigsaw puzzle in which they are never entirely sure of the central picture.

The personal quest illuminates a whole segment of 20th century history and 21st century parallels. Some individuals seem unaware of the atrocities of the Stalin era. The brothers’ research suggest that for many the Cold War has never finished. The trip to a Moscow library is made under constant surveillance, a request for information from the French Secret Service will only be met 50 years after the date of the last entry in a file.

Submerging the viewer in the complexities of the situation and the rubik’s cube of possibilities makes for a slightly overlong but always absorbing film. The warmest, most engaging scenes are an interview with Svetlana filmed in 2008 and an encounter with Lily filmed in Moscow in the Summer of 1989. Is this an old woman sharing fond memories or a great pretender giving her final performance?