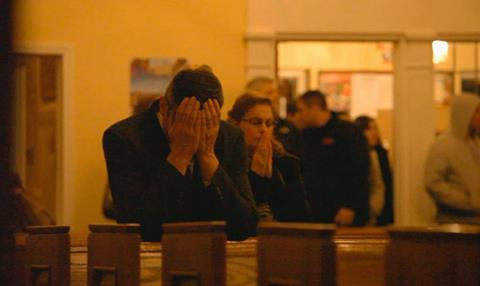 In Newtown, Kim A. Snyder (Welcome to Shelbyville, Remember Me) visits families of children killed in the Sandy Hook school shootings of December 2012.  12-14-12, like 9/11, is a monumental date. Snyder revisits it on an intimate scale.

Sandy Hook was many tragedies ago. And, even as the body count of Americans killed by firearms continues to rise, the sale of guns in the US is soaring.

This tearful portrait of parents remembering their fallen children is Oprah-ready for discussion on US television, just as Barack Obama tries (again) to force modest gun controls on a resistant Congress. With the neutral aesthetic of a news report, the doc will have its strongest impact on American television.

Given the attention to gun violence from films like Chi-Rac, Newtown may find its way into markets outside the US as a guide for incredulous foreigners to the gun crisis in a country which has been watching its children die.

In Snyder’s look at a community after that bloodbath, we first hear police radios and see the images outside the elementary school where a deranged young man killed 20 children and six adults after he shot his mother, who gave him the weapons and ammunition.

Snyder’s visual treatment of the killings is discreet, befitting the Connecticut town that looks near-perfect in aerial shots of picturesque New England  – no photographs of the boy murderer or of his house, no pictures of the interior of the school, no bodies being taken away in ambulances. Newtown, which focuses on the bereaved families, is about coming to terms with loss.

The families who come on camera are eager to talk about their children and their lives before the shootings changed everything. (Did other families choose not to share their grief with the filmmaker?) The parents are still shell-shocked, weighed down by a tangle of emotions —  self-questioning, corrosive guilt, and inescapable memories of their children and the shots that killed them.

Painful as those memories are, the parents and siblings are haunted by the possibility that each child’s short life will be forgotten. With the grief of remembrance, there is also the anxiety of losing touch with the brief existence of a loved child. Parents cling to photographs and to clothing to ensure that those memories stay vital. Snyder benefited from family archives of pictures and videotape of the lost children, which appear in swirls of mourning, celebration of interrupted lives, and a recognition of the chilling finality of death.

More fleeting than those memories are the efforts by Obama to move the US Congress toward mandating background checks on those who purchase firearms, so the next Sandy Hook might be avoided. When the Congress voted against those checks, the parents who flew to Washington on Air Force One to lobby legislators were dumbstruck. Helplessness in the wake of an unimaginable crime is followed by the futility of convincing politicians to keep guns out of the hands of other disturbed people who might kill helpless children again.

Still, if Newtown is a portrait of a community, it is as incomplete as any film that concentrates on one side of a tragedy. We see families come together to grieve with each other and to cherish the children who survived. But if Newtown is anything like suburban America, there are people there who support the National Rifle Association, which opposes any restrictions on guns, and still does after Newtown and dozens of similar massacres. Snyder’s families are brave injured souls, but the outside world is as perilous as ever.