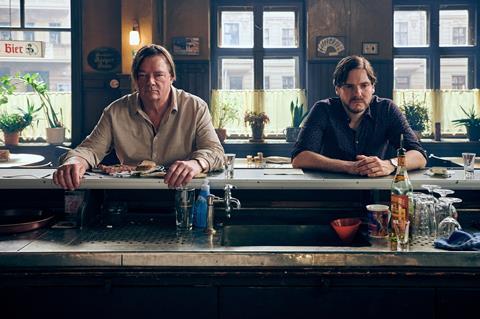 Daniel Bruhl takes inspiration from the Call My Agent book of self-mockery for his directorial debut Next Door. The travails of a popular Spanish/German actor confronted by a disgruntled neighbour yields moments of bittersweet comic exasperation especially when the tone darkens and the stakes are raised. Bruhl’s popularity and profile should guarantee commercial traction, especially in the domestic market, for this smoothly handled chamber piece.

Rarely called upon to tackle comedy in his 20-year career, Bruhl remedies that with a film developed from his original idea and written by Daniel Kehlmann, author of Me & Kaminski, the 2015 film in which Bruhl starred.

Like the recent British television series Staged or Nicolas Maury’s My Best Part (2020),Next Door presents us with a blurry, roughed-up version of a performer we think we know. Successful movie star Daniel is living his best life in Berlin. His stunning, split-level apartment has floor-to-ceiling glass windows. His morning routine revolves around a session on the rowing machine, a coffee from his designer espresso-maker and a healthy breakfast that looks more like a work of art. He is married to Clara (Aenne Schwarz), has two children and a nanny to ensure the smooth running of the household.

Daniel is heading to London for a casting call on a superhero blockbuster. En route to the airport, he ventures into Mother’s Milk Bar, a mixture of Cheers and the kind of tavern that might fit right into an Aki Kaurismaki film. We gain a stronger fix on Daniel’s personality as he swans around, making calls, playing the multi-lingual charmer and lightly carrying the painful burden of fame. Autographs are given, selfies are taken. He falls into conversation with his neighbour and former East Berliner Bruno (a wonderfully sardonic, scene-stealing Peter Kurth). Bruno is immune to the ’Danny Boy charm’ and unapologetic in voicing his dislike of Daniel’s hammy acting, his disdain for Daniel’s ’Stasi classic’ and his general air of superiority. Bruno needles and nitpicks in the most reasonable, good-humoured manner as Daniel struggles to contain his anger. It gradually transpires that Bruno knows more about Daniel’s life than he knows himself.

Next Door is basically a two-hander set in a pub but fluid camerawork from Jens Harrant and constant diversions ensure that it never feels claustrophobic or overly theatrical. The contrivances required to ensure that Daniel never strays far from the Mother’s Milk Bar do grow wearying but the revelations provided by Bruno ensure that the tension is sustained.

Kehlmann’s script strays into wider issues around gentrification, the legacy of a divided Germany and the class divide. ”Folks like you can’t understand folks like us,” says Bruno.The essence of Next Door remains the skirmishes between a vengeful Bruno and a distraught Daniel. Bruhl is convincing in his teeth-grinding, clenched-jaw consternation but Peter Kurth nudges the acting honours, playing with a light, airy touch. His affable, twinkly-eyed manner is disarming and much of the film’s mirth derives from his understated, slightly apologetic delight in destroying all the certainties of Daniel’s privileged life.

A little more venom or bite might have been welcome but this is still an entertaining skewering of celebrity and the way a single day can flip from triumph to outright disaster.