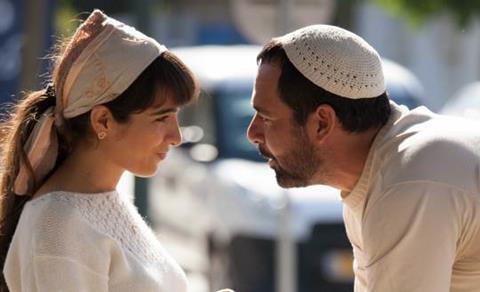 A decent man is drawn into organised crime only to find that, once he has become a fully blooded member of the underworld, he can’t opt out again. It’s a familiar trajectory which is handled here with a slightly jarring combination of intimate drama and bruising, violent action sequences.

This second feature by Meni Yaesh reunites him with real-life husband and wife acting duo Moris Cohen and Rotem Zisman-Cohen, two of the cast members of his debut, God’s Neighbors, which premiered at Cannes Critic’s Week. And this film also shares certain tonal similarities. Yaesh’s penchant for genre elements is on show in both pictures. The fight sequences here are slickly choreographed; slow motion is repeatedly employed to underline moments of tension. It is muscular filmmaking, but tonally it may not sit easily within an arthouse market, a fact which might restrict the film’s theatrical potential. However, the strong central performances and visceral energy should ensure further festival berths.

Ovadia Rachmim (Moris Cohen), a burly, brick-built doorman at a Tel Aviv night club, has the kind of skillset that gets him noticed by all the wrong people. He’s not the kind of man who would start a fight. But he will invariably finish it. Local mobster Shalom (Alon Dahan) regularly tries to tempt him with offers of lucrative work. But Ovadia, who is prone to dispensing lectures on drug use and the other moral failings of his co-workers, prefers to stay loyal to his friend and boss, Club Heaven’s manager Michael (Haim Znati). He supplements his income by hauling furniture in his removal truck.

But after trying fruitlessly to conceive for five years, Ovadia feels he is beginning to lose touch with his wife Rachel (Zisman-Cohen). There’s an intimacy and subtlety to the filmmaking when the husband and wife share the screen. She leans away from him very slightly when they sit together, her head bowed to avoid meeting his eye; he squares up to the doctor as if he could fight the news of their latest failed attempt to have a baby. So when Michael next offers him work, Ovadia accepts, taking the money to invest in private fertility treatment and the chance, finally, of being a father.

Initially reticent, he soon gets a taste for the work – debt collection and intimidation, with the occasional beating thrown in – but the stress takes its toll on his even temper. The club increasingly becomes the arena where Ovadia’s anger boils over. Once the fertility treatment is successful, Ovadia tries to distance himself from the gangsters who paid for it. But Shalom has other plans for him, plans which mean that Ovadia must choose between betraying his friend Michael, or putting his wife and unborn child in danger.

Our Father is a solid drama which benefits from Cohen’s expressive physicality and brawny screen presence. However the arc, from morally upstanding man to fallen, corrupted anti-hero, is somewhat predictable. That said, a final shot, in which Cohen wordlessly expresses the joy of parenthood tempered with the knowledge that he is no longer fully fit to be a father, is a powerful moment indeed.