'Our Souls At Night': Venice Review 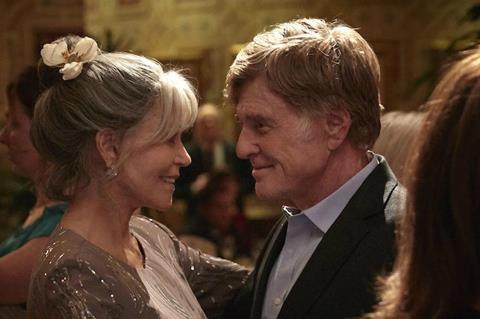 A heartwarming, bedwarming twilight-years romance starring Robert Redford and Jane Fonda, Our Souls At Night is a  Netflix-produced charmer which screened out of competition at this year’s Venice Film Festival, and does what it says on the box - right down to its TV-friendly aspect ratio.

This is a career celebration as much as a drama

Adapted from the novel of the same name, which Colorado writer Kent Haruf completed weeks before his death in 2014, Our Souls At Night gets its neat, talking-point premise out of the way in the first couple of minutes. A widowed older woman knocks on the door of a similarly lonely male neighbour one evening, and proposes that they begin sleeping together. “It’s not about sex”, she tells him. “It’s about getting through the night”.

Nothing of what follows will be this surprising, or surprising at all, but that’s not to belittle a tender film that goes beyond twinkly silver-haired romance to examine how the arrangement entered into by Addie and Louis is as good a way of any of getting close to a person and with as much chance of success as blood-ties or marriage. It’s just that there’s an air of well-oiled, made-for-TV efficiency about the exercise that extends from Lunchbox director Ritesh Batra’s safe hand on the tiller to Stephen Goldblatt’s golden-light photography.

Everything, in the end, seems to revolve around that casting coup. Like the pairing of Henry Fonda and Katharine Hepburn in On Golden Pond, this is a career celebration as much as a drama, one that’s given extra relevance, and poignancy, by Redford’s recent announcement that he is giving up acting to focus on direction.

Like her character, Jane Fonda makes all the running as smart, self-assured Addie, while Redford’s pared-back account of widower Louis seems more about simply being there than losing himself a role – though to be fair, this is actually quite a compelling quality, one that was also exploited in JC Chandor’s ocean survival tale All Is Lost. Here too, this undemonstrativeness fits his character, that of a retired schoolteacher who has retreated into himself while keeping up social appearances by hanging out with a crew of bantering buddies at the local diner somewhere in all-white, small-town Colorado.

Elegant Addie lives in a tasteful, antique-peppered suburban house and likes to drink red wine. Beer-drinker Louis’ furniture looks like it was ordered by the metre, probably not by him. He has a whole rack of check flannel shirts, all in shades of blue to match his eyes, and he’s so used to TV dinners he neglects to turn the weather forecast off when Addie first comes to visit. It’s this disjunct that powers the gentle dramedy of the film’s early scenes, after Louis agrees to Addie’s decently indecent proposal, and the two settle down in her bed for their first awkward night together.

Gradually, in the course of dinners and night-talks, we will find out about their former partners, about the 11 year-old daughter Addie lost, about the affair that Louis had forty years previously with a fellow teacher. There are grown-up kids too - traditional dramatic barriers to the blossoming of late-life romance – and sure enough Addie’s troubled son Gene (Schoenaerts, good), arrives, complete with failing marriage and business, to glare at Louis and remind his mum how much her new beau hurt his wife by cheating on her all those years ago.

When Gene leaves his own seven year-old son Jamie (Armitage) with granny while he tries to sort his life out, it’s a test for a couple who are still checking each other out - especially when the insecure little tyke asks to sleep in the big bed. It’s also a chance for the script to twin feelgood golden-years romance with good-old-days nostalgia, as Louis, who never had a son, weans Jamie off his smartphone games by getting out a train set, buying him a cute dog and taking him and Addie on a Rockies camping expedition. This is all of a piece with the film’s first shot: a midwest windmill whirring atop its derrick. It lasts a couple of seconds, but it tells us what we’re getting as efficiently as a three-page synposis.

Screenplay: Scott Neustadter, Michael H. Weber, based on the novel by Kent Haruf