Steven S. DeKnight takes on a new battle for the planet in this action sequel 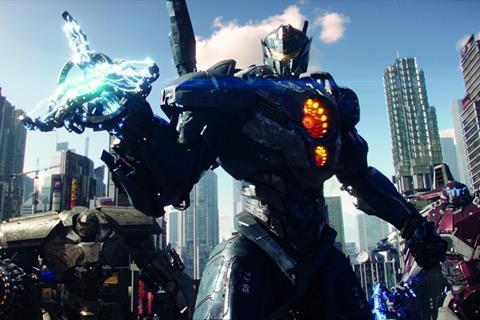 The world is at risk again in Pacific Rim Uprising, the sequel to Guillermo del Toro’s battle for the planet actioner Pacific Rim (2013). Directed by Steven S DeKnight, this new instalment is a tech tag-team bout that takes the robots-monsters’ fight from Los Angeles to Sydney, Tokyo and Siberia, with lots of infrastructure to rebuild in its wake.

Uprising’s challenge is to reach a broader public than Pacific Rim, which underperformed in the US ($101.8m against a budget of $190m), before earning a big chunk in Asia ($111.9m in China alone). Stars John Boyega and Scott Eastwood will boost the audience in America, but the locations and fellow cast suggest that the film’s producers see their fortunes on the far side of the Pacific.

Things start out in the ruins of Los Angeles. Jake Pentecost (Boyega), son of Pacific Rim’s martyr/hero Stacker (Idris Elba), is scrounging for parts for huge human-powered Jaeger robots when he encounters another scrounger, teenaged tech wiz Amara Namani (Cailee Spaeny), orphaned in the last war. The two end up arrested and, given the choice between service and prison, they sign up under the command of Nate Lambert (Eastwood), to train a new generation of Cadets (kids in Power Ranger suits who are still a few sequels away from being able to legally drink).

Filling out the team are Mako Mori (Rinko Kikuchi), the adopted sister to Jake’s prodigal son, and Liwen Shao (Jing Tian), the imperious and humorless exec of a corporation earning profits by fighting the Kaiju, the monsters trapped until now under the seabed.

Acting is mostly dutiful beyond the swaggering Boyega and Eastwood, who have a tentative camaraderie and a friendly rivalry for mechanic Jules Reyes (Adria Arjona), with the spotlight shifting to grand-scale fights between Jaegers and Kaijus. As in the first film, Jake and Nate power their Jaeger through a neural bridge, which means they run, punch and jab on the inside to trigger the huge robot’s motions. Once a clever twist on The Wizard of Oz, the gimmick now feels like a tired trick, with the commanders looking as if they’re line-dancing in a workout room.

Some of the most fun in Uprising comes from its elder statesmen, holdovers from Pacific Rim who play for laughs. Burn Gorman is Dr. Hermann Gottlieb, by far the oldest living character in the cast, who puts his eccentricities on hold long enough to advise the young team. Make-up manages to turn Gorman, 43, into a credible and quirky fossil. Comic relief on the other side comes from Charlie Day as Dr. Newton Geiszler, a would-be link between Americans and Chinese whose loyalties change out of pique. In a film full of inflated hyper-heroics, he brings the spirit of clownish pettiness to world destruction.

On the tech side, global war is less poetic than in Pacific Rim. Battles are fought mostly in daylight, which means that we get every detail of robot and monster and of their destruction of skyscrapers. Face-offs in Siberia and finally on the slopes of Mt. Fuji provide some welcome relief from the sameness of modern cities, the snow and ice adding an appealing new degree of difficulty to the same old fight.