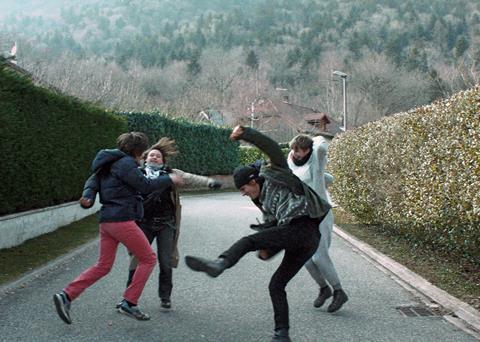 It’s hard enough being a teenager without having to cope with the balance between matter and anti-matter in your safe-seeming sleepy enclave on the Franco-Swiss border. Set in the town where Particules co-writer/director Blaise Harrison grew up and which is also home to the Large Hadron Collider at the CERN particle physics lab, this is a delectably disturbing tale, definitely belonging to the ‘the less you know going in, the better” school of viewing, a principle that Harrison applied to his cast of young people from the Gex region who received script pages day to day as shooting took place..

The film’s consistently earned sense of unease is enhanced by an excellent anxiety-boosting score.

CERN’s Collider is the largest machine in the world; while it is situated 100 metres underground, its ineffable power may sneak to the surface in ways only spacey teens are equipped to notice. The film’s tone insinuates that things that go bump in the night also go bump in the day. Road signs should warn not only of twisty curves and possible skids but shifts in the fabric of the universe ahead.

The opening credits of Particules establish a creepy atmosphere that never subsides. Names are made up of pulsing black and white particles, like those generated by an old analogue TV without a signal. That visual effect will crop up again with ghostly oomph. We are introduced to P.A.(Thomas Daloz ) a lanky fellow with a permanent hangdog expression and a floppy Beatles haircut, as he struggles to stay awake in a school bus winding through still-dark streets. He and his three closest pals have a musical group and mess around like high school seniors the world over. None of them care much about school or fear authority figures.

P.A. — short for ‘Pierre-Andre’ —and his best friend Merou (Salvatore Ferro) would rather goof off in the rear of the classroom than pay attention to their teacher describe Probability Theory, even though she’s warning it will almost certainly be on the graduation exam. Anybody who was ever a teenager will recognise the vibe. Capturing it is one of the film’s major accomplishments.

P.A. goes on a school trip to visit the Hadron Collider in its extensive underground complex designed to hurtle particles into each other, replicating the conditions of the Big Bang to get at the origins of life itself. P.A. has already started witnessing off-kilter occurrences prior to seeing the accelerator — let’s just say his visions accelerate after the field trip. Quantum physics tells us there really could be an infinity of parallel worlds. But where does the so-called natural world end and its possibly evil, possibly friendlier twin, the UN-natural world begin?

These kids don’t say much — one full sentence with a subject and predicate is a lot. When something truly disturbing happens and the grown-ups demand to know whether drugs and alcohol were involved and why witnesses are so cavalier about the whole thing, it’s just not possible to extract any information from local youths. They’re too in the present moment to report on even the recent past. Stuff happens, y’know?

The film’s consistently earned sense of unease is enhanced by an excellent anxiety-boosting score.