Thus with a kiss….and a mobile phone… 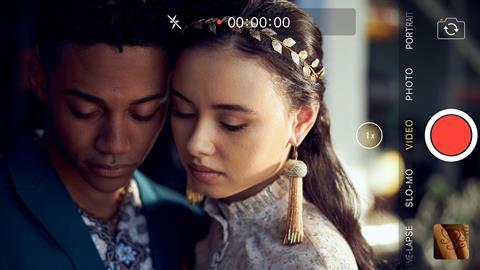 ’Romeo And Juliet’ enters the social-media age with R#J, a fitfully intriguing experiment to adapt Shakespeare’s tragedy to the world of FaceTime, Instagram and Facebook. Told mostly through the screens that consume the characters’ lives, the feature debut of director Carey Williams has its superficial pleasures as a riff on our media-soaked moment, but the novelty of the approach is hard to sustain, and a fresh-faced cast fails to capitalise on the play’s enduring appeal.

Targeting Gen Z viewers, who are about the same age as the film’s star-crossed lovers, R#J will play as part of Sundance’s NEXT section. Fans of the Bard may be tempted to see this latest Romeo And Juliet redo, and those who have followed producer Timur Bekmambetov’s recent forays into unconventional storytelling styles, as seen in Hardcore Henry and Searching, might also log on.

Camaron Engels plays Romeo Montague, who lives in modern Verona (which looks a lot like Southern California) and falls in love with Juliet (Francesca Noel), not realising she is part of the Capulet clan, his family’s sworn enemies. Undeterred, they start a relationship over text and social-media apps, sharing their feelings at the same time they exchange Spotify playlists. But their growing devotion is threatened by their families’ bitter feud, which may force Romeo to choose between his kin and his beloved.

Williams audaciously mixes Shakespearean verse with modern slang and the linguistics shorthands we’ve all adopted from communicating through social media. (One wonders what he would have made of GIFs and emojis.) Engels and Noel are only on screen about half the time their characters appear in the story — the other half consists of images of their smartphones as they navigate around apps, check their text messages and watch videos. This creates a distancing effect that may be intentional, although on the whole R#J isn’t very critical of our distracted, technology-dependent reality. If anything, the film suggests that, for those Romeo and Juliet’s age, this screen-heavy existence is normal — and that, when relationships start to blossom, the ability to write back and forth instantaneously can be incredibly intimate and seductive.

But despite the potentially thought-provoking premise — how would fiction’s most famous love story feel if it was written in the 21st century? — R#J doesn’t do much with its provocative conceit. Romeo and Juliet’s rapid-fire flirting via social media and texts can be appealing, but eventually Williams is hemmed in by the need to find excuses to integrate Instagram Stories and FaceTime into the plot, which rarely feels organic to the proceedings. Plus, because of similar gimmicks in better films such as Searching, R#J’s attempt to tell a whole story through screens doesn’t seem all that original.

The cast enthusiastically digs into Shakespeare’s poetic words, although they often strain to bring those words to life. (Of the supporting players, Siddiq Saunderson is the most ebullient, playing Romeo’s loyal friend Mercutio with such swagger that he seems about to burst through the frame.) Engels and Noel have the guileless sweetness of young lovers, but as R#J grows darker, they simply don’t have the heft to express their characters’ anguished circumstances.

Indeed, instead of a slowly building tragedy, R#J merely pivots to overblown melodrama, mistaking histrionics for the pain of doomed love. To his credit, Williams does find a way to subvert this classic text’s ending, in the process hinting that everything we see on social media may not be an accurate representation of users’ real lives. But that insightful observation ends up doubling as a critique of the film, which is so obsessed with its fancy gadgets that it doesn’t seem sufficiently engaged with the flesh-and-blood people operating those apps.