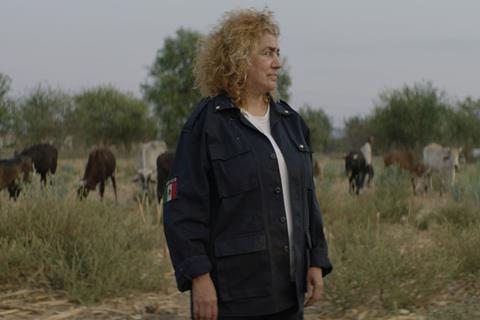 A visually stunning, thoughtful, and profoundly unsettling study of the impact of male violence on the lives of three women played out in the pitiless sunlight of rural southern Mexico, Natalia López Gallardo’s feature debut Robe Of Gems is creepy in all the right ways. Feeling like an experimental playbook of disturbing cinematic devices and atmospherics, this is about as close as a film can come to being a horror item without actually being one: because the real horror, we are not allowed to forget, is in the lives that the women are leading. It is a potent calling card for López Gallardo, who at Berlin takes her place amongst other female Mexican directors such as Fernanda Valadez and Tatiana Huezo who are currently making international waves.

At first, with its images of children lazing in a pool, Robe Of Gems looks as though it’s going to be a gorgeously filmed study of bourgeois decadence. In the middle of her divorce, Isabel (Nailea Norvind, the cast’s only professional actor) takes her kids out to her family’s country house in what will turn out to be the worst decision of her life. There she finds that the sister of the housekeeper, María (Antonia Olivares), has gone missing. Searches of the area yield nothing, and neither does a visit to a local office whose sole purpose seems to be to register people’s disappearances. A local taxi driver is suspected of the murder of María’s sister and, despite warnings from María herself that, as an outsider, she should stay out of it, Isabel decides to get involved, practically abandoning her children to lie around the pool in the heat, high on mushrooms.

To raise cash María is herself moonlighting for a drugs-running operation with Adán (Juan Daniel Garcia Treviño). He happens to be the son of local police chief Roberta (Aida Roa), who has the unlucky role of being the last decent cop in town: one early scene sees Roberta instructing Adán to remove all his clothes as a symbolic reminder that under his tough-guy appearance, he’s still her son. Later Maria will try to leave her second job, but she’s told that it’s impossible — when you’re in, you’re in for good.

It’s a plot that, filmed differently, would make for a perfectly fine narco drama. But López Gallardo isn’t interested in that, and it quickly, and sometimes puzzlingly, becomes clear that she is painting a dreamy, symbolic and powerfully cumulative portrait of a society in which the natural laws that should bind people together have collapsed entirely, leaving behind only men with guns and women whose attempts to repair things are doomed to failure.

Surprising, disquieting and visually memorable scenes pile up, as you’d expect from a director who has worked as the editor for Cannes-award winning directors Carlos Reygadas (Post Tenebras Lux) and Amat Escalante (Heli). One tour de force sequence has a character being pulled over whilst listening to a cheesy 70s Spanish Eurovision ballad, and kidnapped — after which the kidnapper starts the engine and drives off, as the same song plays on. And that’s not to mention the unforgettable, slow-motion final scene, a metaphorical vision in miniature perhaps of Mexican society, which will leave viewers stunned and horrified as the credits start up and which turns the beautiful image of the title right on its head. A couple of scenes, it must be said, feel a little too look-at-me, but in the main it’s beautifully judged.

A visual impression is built up of a world where the norms don’t apply, where the only rule is constant threat. Adrián Durazo’s daring camerawork is unfailingly interesting: characters are framed so that heads are out of shot, with dialogue coming from offscreen, so it’s the reactions to the dialogue that take centre stage. At one point, María stares directly into camera, as though asking us how we could have let all this happen.

Lengthy takes abound capturing seemingly at random whatever action happens to be occurring in the frame at the time. In one scene, shockingly, a kidnapped body is pulled into view out of nowhere, while in another, the camera lingers on an image of just another roadside house which is in fact special, since a terrible event has just happened inside. Curtains flap elegantly in the breeze: later, these same flapping curtains will knock a vase to the floor, shattering it.

And apart from one scene, Lynchian in its weirdness, in which a blind woman sings the Ave María to a sick child, it all occurs in an atmosphere of hushed repression. Even the local mob leader gets his death threats across via a quiet word in someone’s ear. Let us not forget, Robe Of Gems always reminds us, that these are normal people, who are not being allowed to live normal lives. You wouldn’t want to live there.