Documentary about a Lithuanian family in straitened circumstances is unexpectedly uplifting 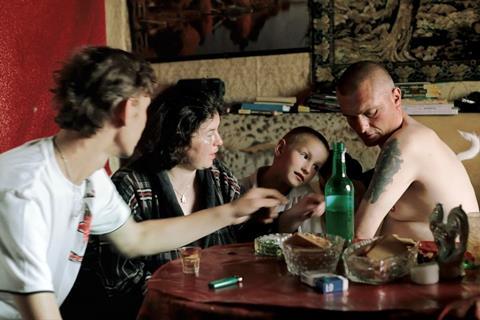 From Lithuania, Linas Mikuta shows a scenario that could take place in almost any town or city in the world: a family thrown into the margins by poverty, scrabbling for a roof over their heads and food on the table. But what makes this fly-on-the-wall documentary so special is that its tone doesn’t match the dire straits of its subjects - Diana, Aivaras and their eight-year-old son Romanas. Avoiding both sentimentality and judgement, and no doubt choosing his moments well, Mikuta celebrates the positive fundamentals of family life – love, togetherness, protection – that fly in the face of hardship.

Personal hardship appears to be prompting these adults to do better by their own child.

The family lives with their dog in a squatted flat within a large, derelict building in the harbour town of Klaipėda. We only see two rooms – a living room/bedroom and a kitchen, the former a charming composite of found furniture and personal knick-knacks, the latter little more than a blackened, burnt-out shell with an oven and sink.

Aivaras fills water bottles in the church; the couple scavenges from dumpsters for things to use or sell; food seems rationed, though they appear healthy. They’re decently dressed, even if Diana’s shabby ‘housecoat’ and habit of barking orders make her appear more fearsome than she actually is. So they’re managing. While showing their situation, Mikuta doesn’t seek to establish its context. There’s a passing mention of the job centre, a bitter reference to the refusal of Diana’s mother to help them, but nothing to explain their predicament.

The point is that any number of back stories could have put them here; the film’s concern is how they respond. And it appears to be with phlegmatic good humour. Diana is house-proud, Aivaras good with his hands, and Romanas is a delight – responsible and fun-loving, dare one say having a “normal” childhood playing with his friends in the sunshine of the streets, the harbour, the beach. And the family makes an amusing unit, whether awkwardly hosting Romanas’ birthday tea, shampooing the dog in a fountain on an outing to the harbour, or bonding over the tattoos of one of Aivaras’s friends.

Mikuta and camerawoman Kristina Sereikaitė use a mostly static, sometimes painterly camera (the film is beautifully composed), and the family appears comfortable with their presence. Romanas offers the lens a smiling, unflinching gaze, while the parents are more circumspect with their eyes, less so their conversation. “I’m so exhausted. My butt hurts for some reason,” Diana declares at one point, apropos of nothing and without a hint of self-consciousness.

Sadness and seriousness do linger in the corners, as when a song brings a tearful Aivaras to recall his abandonment as a child, or his disturbing, one suspects significant dream about the local priest attacking his son. Personal hardship appears to be prompting these adults to do better by their own child. In that sense, Mikuta captures another common experience; how smart of him to make of it something so cheerily uplifting.