‘Rotting In The Sun’: Sundance Review 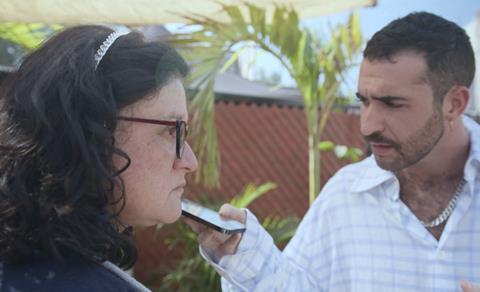 ‘Rotting In The Sun’

Sebastian Silva has long had a fondness for self-centred toxic characters and a tendency towards the trippy in movies including Magic Magic and Crystal Fairy & The Magical Cactus and the same is true of Rotting In The Sun, in which he plays a version of himself. Over the course of almost two hours, he offers large quantities of seemingly unsimulated gay sex and drug taking, a satirical sideswipe at ’content creators’ plus an accident and a cover-up psychodrama, which injects much-needed structure into the deliberately chaotic proceedings.

The full-frontal nature of this film and its in-your-face attitude may not be mainstream but they are the sort of ingredients cult status is made of. They also make Rotting In The Sun most likely to appeal to existing fans and festivals looking for entries in their late-night slots after its premiere at Sundance. The director will no doubt be hoping it fares better than his last feature Fistful of Dirt, which premiered at Telluride in 2018 but was never subsequently released. Rotting In The Sun may be a minor entry on Silva’s CV compared to the likes of 2009’s The Maid - whose star Catalina Saavedra is also the best thing about his latest - but Sundance’s love for the Chilean director is enduring, as this is the seventh of his features to play there.

Silva and his co-writer Pedro Peirano (a regular collaborator who co-wrote The Maid) take no prisoners in the opening half. It becomes a full-on assault on the senses - it’s as though Silva is challenging his audience to ride or die with the cinematic equivalent of standing in a wind tunnel while someone hurls furniture at you and another person runs their fingernails down a blackboard at high volume. The title of the film pulses to the rhythm and music of ’Jingle Bells’ before we get into the business of the almost constantly moving handheld camerawork from cinematographer Gabriel Diaz, further unsettled by Nascuy Linares’ often cacophonous scoring. As if this kinetic energy were not enough, there are also segments where snippets of internet videos and other web content flicker by, showing us what Silva is looking at on his phone - it’s little wonder the film is credited with three editors.

The story jumps off from a genuine encounter in the director’s real life - a chance meeting with Jordan Firstman. While Firstman may not be a household name, the gay comedian and social influencer has gathered an 800,000-strong following on Instagram thanks to posts, frequently shirtless, with titles like: “This is my impression of a straight man who does not need a pick-up truck.”  Here that meeting happens at a nudist beach which is a well-known gay hook-up spot, where Silva has retreated in a bid to shake off an ennui that even ketamine can’t touch and which has been leading him to Google things like, “how to commit suicide without pain”.

The pair meet in a near-drowning incident and Firstman immediately hurls himself at the director, claiming a spiritual connection because he just happened to watch Crystal Fairy the previous night. His attempts to woo Silva to collaborate with him are both rapid-fire and utterly devoid of self-awareness - if nothing else Firstman is a good sport for being prepared to portray himself in such a negative light. All of this is irritating for Silva, who sees the instant online popularity of the younger man in sharp contrast to his own creative struggles. However, all of this will also prove an endurance test for most audiences. Silva may be aiming to get us into the discomfort zone but, truth be known, this level of solipsism also becomes boring quite quickly.

It’s a relief then, when the film takes a sudden change of tack after the action returns to Silva’s Mexico City apartment and, onscreen, the director, having cynically realised the advantages of having Firstman and his ready-made audience on board for a project, disappears. This turn of events is something Silva’s maid Vero (Saavedara) knows a lot more about than she wants to tell Firstman when he arrives to further the pair’s collaborative plans. This is where Saavedra steps into the psychodrama limelight, becoming increasingly twitchy as the film deals with the secret only she and we are privy to. Her anxiety permeates the remainder of the film, which becomes blackly funny in the face of Firstman’s vaccuousness. While the first half of Rotting In The Sun may be overly self-indulgent, once Silva gets himself out of his system, he gives his skills and Saavedra an opportunity to shine.