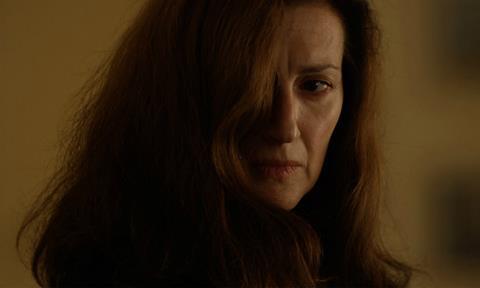 The tension between realising her creative ambitions and the expectations placed on a mother in a traditionally patriarchal society threaten to tear apart 50-year-old Manana (Nata Murvanidze). This bold first feature from Ana Urushadze, the daughter of Georgian director Zaza Urushadze, layers mythology and symbolism over the stark, brutalism of a post-communist society. And while it suffers slightly from having a central character who is increasingly unmoored from the the world around her - Manana seems both away with the fairies and feverishly internalised - the film makes strong points about gender roles and the sacrifices required in the service of the compulsion to create.

The image of a woman ripped in half is a potent one, evoking Manana’s mental wrench between her family and her writing.

Scary Mother arrives in competition in Sarajevo following its world premiere in competition in Locarno. While the film’s unflinching gaze and noteworthy themes should ensure further festival interest, that might prove to be the extent of the film’s journey although distributors in territories with a proven interest in new voices from Eastern Europe would do well to take a look. The indefinable quality of the picture, might prove a marketing challenge for prospective distributors.

Gaunt, haunted, with scrawled biro notes spiralling up her arms like knotted veins, Manana seems like a woman consumed. Her family, bullish husband Anri (Dimitri Tatishvili), daughter Dea (Anastasia Chanturaia) and two sons, accommodate her passion project — a book which she has not yet show them — by giving her the bedroom in which to write. But that is as far as it goes in the way of support from Anri. He criticises her hair, her clothes. Her failure to primp and to look after herself, he suggests, is a failure of her basic duty as a woman.

Manana’s main champion is her friend Nukri (Ramaz Ioseliani), the owner of the local stationers and the editor of her book. He is convinced of her genius and of the game-changing impact her writing will have when it is unleashed. He is all too aware of the storms brewing when Manana finally reveals the highly personal and not entirely flattering contents of the book to her family.

The scene when she finally does so is savage. The camera slowly pulls back as Manana rushes through the opening pages - all deviant fantasies and churning hate - to take the shellshocked reactions of her kids. Anri insists on burning the manuscript, describing her, almost affectionately, as “my little fool”.

In the book, and in the dreams which bleed into her writing, Manana imagines herself as a character from Philippine mythology. Manananggal is a woman by day, but by night she tears herself in half and becomes a vengeful, bat winged creature who feasts on the blood of pregnant women. The image of a woman ripped in half is a potent one, evoking Manana’s mental wrench between her family and her writing. And Urushadze echoes it in the photography, frequently bisecting the frame into two distinct halves.

The other key figure in the story is Manana’s father, who is translating the manuscript without knowing the identity of the author. “The text is ingenious and obscene,” he says approvingly. It’s perhaps the point of the film that all the appraisal of Manana’s work comes from men, but Manana’s voice, so present in her full-blooded writing, is strangely absent from a character who drifts around in a disorientated, almost fugue-like state.