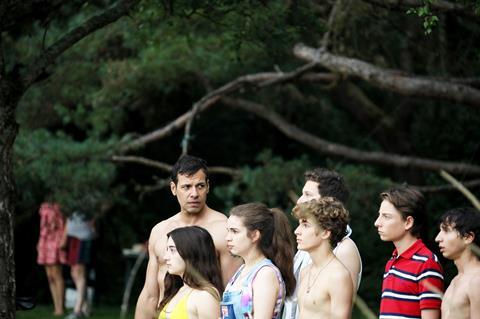 The unbridgeable divide between two generations – a group of elite teenagers at a private school and the 40-year-old substitute teacher who becomes fixated on them – is a breeding ground for fear and suspicion. Sébastien Marnier’s second feature, loosely based on a 2002 novel by Christophe Dufossé, borrows stylistic devices from horror to create an atmosphere of suffocating paranoia. Although a sweatily effective mood piece, the film’s plotting stumbles slightly towards the end of the third act

Haneke’s The White Ribbon is a dramatic touchstone

With its teen nihilism and oppressive aesthetic of long, airless summer days, the picture has some kinship with Eva Husson’s Bang Gang: A Modern Love Story, although not the same sexual shock value. The film’s slippery refusal to fit neatly into any one particular genre makes it not quite a psychological horror film, although it obliquely references the oeuvre of John Carpenter. It also has a heady sense of heightened and twisted reality which distances it from conventional thrillers. The film is likely to play best with audiences open to slickly crafted pictures which don’t quite adhere to genre conventions.

Pierre (Laurent Lafitte, Elle) is brings an outsider’s eye to the dynamics of St Joseph, a school with “an excellent reputation”, the headmaster is at pains to stress. Drafted in as a supply teacher, he expects to find children traumatised by the attempted suicide of his predecessor, who jumped from a window in front of them. Instead, he is troubled by the inscrutable and unnerving Children Of The Corn-style assurance of the kids, all selected for their exceptional intellectual abilities. In particular, there is a closed-circle clique of six teenagers, who set Pierre’s nerves on edge with their secrecy and air of matter-of-fact superiority. There’s an ambiguity to the way the kids are depicted which brings with it a hint of real threat: Haneke’s The White Ribbon is a dramatic touchstone.

Pierre starts to stalk them, witnessing a ritualistic series of tests and ordeals that they stoically endure. And he stumbles on a collection of DVDs which edit together footage of atrocities and end-of-days imagery, with warnings of society’s collective suicide. Meanwhile, his fellow teachers are disengaged and more interested in beers and dancing on a friday night than the aloof, self-radicalised kids in their care. Rattled by the teens, Pierre starts to feel personally persecuted by them.

A retro-electronic score is the most obvious nod to 1980s horror movies in a film which also uses anamorphic lenses to distort and bend the interiors, and a recurring motif of beads of anxious sweat. As Pierre becomes increasingly troubled, his own personal space seems to rebel against him. Tap water is tainted brown, his electricity supply falters and cockroaches invade his apartment (it’s no coincidence that the dissertation he is currently labouring over is about Franz Kafka).

Given all the clammily hallucinatory qualities which make the picture so distinctive, the action climax, in which the children’s plans come to fruition, feels curiously flat. More effective is a chilling coda, in which the generational schism is finally overcome in the face of a unifying tragedy.