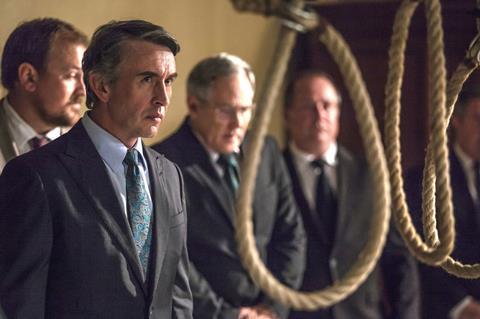 A plodding, old-school courtroom battle struggles to encase an impassioned issue film about the brutality of the death penalty in this worthy, dour South African drama, starring Steve Coogan as a lawyer defending what seems like a lost cause – the case of a young white prison guard who shot seven black men in cold blood.

What stands out in relief from the film’s flat characters and pedestrian storytelling is its dramatic core: the killing machine that death row had become in South Africa by the end of the 1980s

Though he gives a decent-enough account of the story’s crumpled yet principled defence lawyer, Coogan seems a little lost in the role, a state echoed by an accent that is, one presumes, supposed to be that of a South African of recent British origins. Or maybe it’s just that Coogan needs to write his own way into serious parts – as he did in Philomena.

Andrea Riseborough acquits herself well as a determined young prosecution lawyer, but her talent is almost wasted in what turns out to be a minor supporting role. Sales prospects outside of South Africa could be aided by surviving Bee Gee Barry Gibb’s involvement with the project – after seeing an early cut he co-wrote with sons Stephen and Ashley a song, Angels, which plays a little awkwardly over the final credits, its soapy register out of synch with the film’s sombre mood.

What stands out in relief from the film’s flat characters and pedestrian storytelling is its dramatic core: the killing machine that death row had become in South Africa by the end of the 1980s, with 164 executions taking place in Pretoria Central Prison in the year in which Shepherds And Butchers is set, 1987.

The murder that sparks the court case is dealt with efficiently in a tense opening night-chase sequence that ends in an abandoned quarry. The shooter is a young white man, Leon Labuschagne (Dowds, in an emotionally committed performance), his black victims the members of a football team who had cut in front of Labuschagne in their minibus.

Then things slow down, considerably, as human rights lawyer John Weber (Coogan) is assigned to this apparently unwinnable case. He’s virulently against the death penalty – and therefore ‘political’, which in P. W. Botha’s South Africa was code for anyone the regime mistrusted. But scenes of him relaxing at a country club with his partners suggest, tamely, that Weber is also part of a liberal elite – one clearly despised by two working-class Afrikaaner whites with whom Weber clashes, his special-services-operative brother-in law Pierre (Hobbs) and his court deputy Pedrie Wierda (Van Jaarsvelt). In fact the po-faced Weber, a man apparently tormented by unexplained demons, seems a bit of a mystery even to himself.

It’s only when the stubbornly silent Labuschagne gradually opens up under cross-examination, prompting a series of devastating flashbacks to his prison duties, that this toothless courtroom drama begins to bite. The scenes in which we relive with the teenager the disgust, shame and horror of the work he was forced to perform in the killing chambers, where men were sometimes hung six or seven at a time, are visceral and real.

It feels, in the end, as if the whole rather contrived script was written simply as a frame for these bloody, violent denunciations of what happens when the state turns murderer.

Screenplay: Brian Cox, from the novel by Chris Marnewick