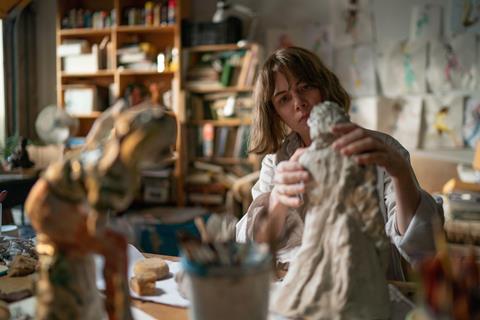 Source: Allyson Riggs/Courtesy of A24

Like the distinctive artwork made by Showing Up’s sculptor protagonist, Kelly Reichardt’s eighth feature is beautifully crafted, a modest gem that grows in impact the more one examines it. Frequent collaborator Michelle Williams portrays a profoundly discontented artist who can’t seem to shake a general malaise, and the film quietly explores all the reasons why she may have arrived at such an unhappy state. As always, Reichardt uses a deceptively tiny story to create something universal and true, eliciting some wry smiles along the way.

This is her first film in the Cannes Official Competition, and the reunion between Reichardt and Williams should entice arthouse crowds. Showing Up is as muted as the director’s previous work, so commercial expectations should be tempered, although good reviews always help the cause.

Williams plays Lizzy, a Portland sculptor who has an exhibition coming up in a week’s time. But Showing Up isn’t a typical “let’s put on a show” narrative — instead, Reichardt examines Lizzy’s daily struggles and frequent nuisances that make it hard for her to focus on her work. Chief among these irritants is Jo (Hong Chau), a more successful artist who has rented an apartment to Lizzy but is an unresponsive landlord, seemingly unconcerned that Lizzy’s hot water is out, which keeps her from showering for days.

The picture’s setting might lead one to guess that Showing Up will be a satire of the art world or a portrait of a sculptor pursuing her muse. And while those are elements of the screenplay by Reichardt and her usual writing partner Jon Raymond, the film has the intimacy and detail of a short story, curious about Lizzy and the people in her orbit — especially her artist family, which includes supportive, self-aggrandising father Bill (Judd Hirsch) and paranoid, troubled brother Sean (First Cow’s John Magaro). Showing Up confidently glides from digression to digression, letting the accumulated incidents serve as a summation of how the insecure, unassertive Lizzy became that way.

Williams has now made four pictures with Reichardt, often depicting characters who feel alienated from their surroundings, holding things in rather than expresing themselves. Lizzy might be the most extreme version of this type, with the Oscar-nominated actress presenting her as a demonstrably un-dynamic individual who absorbs the everyday annoyances that befall her, whether it’s Jo ignoring her requests to fix the water heater or the playfully condescending treatment of Eric (André Benjamin), a smug teacher at the art school which Lizzy once attended and where she now works at as an adminstrator. It’s an impressively controlled performance, Williams wearing a mixture of grimace and frown which suggests that Lizzy has gotten used to not getting her way and is begrudgingly learning to live with it. Even when she works on her sculptures — small figures of people, sometimes bent over or with distorted limbs — there’s no sense of transcendence or divine inspiration. Lizzy is serious about her art, but the film has no illusions about whether it can rescue the creator from her miseries.

The entire ensemble exudes a lifelike nonchalance, with Chau terrific at navigating her character’s knowingly passive-aggressive relationship with Lizzy. Jo’s work gets more attention than Lizzy’s, and Jo finds myriad subtle ways to let her frenemy know this, slowly slicing into Lizzy with false modesty and insincere collegiality. Where Williams plays Lizzy as permanently sour, Chau gives Jo a lighthearted charm, turning the two artists into striking contrasts. Silently, Lizzy envies Jo’s creative success but, perhaps more emphatically, her ease in the world. In one of the film’s great running parts, Reichardt illustrates the differences in their temperaments through a wounded pigeon which Jo rescues but, for some reason, Lizzy becomes responsible for.

Melancholy hovers over the film as we dive deeper into Lizzy’s complicated, often tense interactions with friends and family members. (Maryann Plunkett is appropriately harried as Lizzy’s mother, who also happens to be her stressed-out boss at the art school.) But Reichardt and Williams never ask us to pity this sad-sack character. Rather, Showing Up evolves into a nuanced meditation regarding why some people end up with happy or glum personalities. How much of that is determined by ourselves? And how much by our circumstance?

While asking such questions, Reichardt deftly illuminates one woman’s understated but persistent depression, occasionally finding the humour in all the small indignities — like a lack of hot water — that start to wear her down. Eventually, Lizzy will get to present her art at that exhibition, but Showing Up cannily underplays the outcome. For people like her, one great show won’t make a difference — life itself needs to be resculpted.