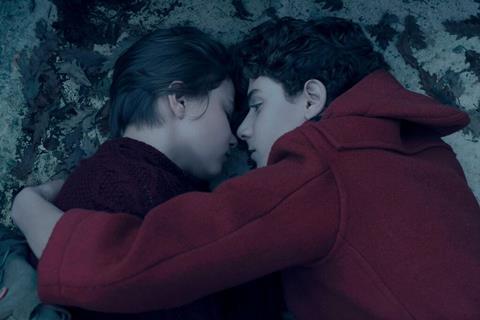 Revisiting and expanding the themes of their prize-winning debut Salvo, Fabio Grassadonia and Antonio Piazza have crafted a hugely ambitious, darkly intriguing second feature. The heady fusion of teenage romance, gothic fantasy and Mafia thriller becomes an immersive, atmospheric drama that should secure sustained festival exposure and increase the commercial prospects for this filmmaking duo.

Sicilian Ghost Story is inspired by the true story of teenager Giuseppe Di Matteo (Gaetano Fernandez) who was kidnapped in 1993 in a bid to silence his father Santino, a Mafia supergrass. His real life ordeal is viewed through the torment of Luna (Julia Jedlikowska), a classmate whose devotion to Giuseppe burned ever brighter in the face of public indifference to his fate.

The film confidently walks the line between grim reality and comforting fantasy as the couple are viewed as a latter-day Romeo and Juliet. The fervour of Luca’s determination to discover what happened to Giuseppe edges her towards a supernatural connection to the captive boy. A letter from Luna becomes the boy’s one solace and escape from weeks of being held in chains.

There are constant fairytale references throughout Sicilian Ghost Story with Luna’s wardrobe of a red duffel coat and red jacket pointing up the Little Red Riding Hood connection. There is an enchanted forest, a magical lake and even a big bad wolf in the form of a vicious attack dog. Luna’s affinity with animals also makes her seem like Snow White, whilst Giuseppe has the qualities of a noble knight as he seeks to protect her in their brief time together and in the fantasy connection they develop.

Cinematographer Luca Bigazzi enhances the emotional intensity of the story with daylight scenes where the piercing Sicilian light makes everything look larger than life. The interiors are rich and treacly and Bigazzi manages to constantly imbue the banal with a sense of the sinister. The superb sound design adds to the heightening of the senses as it seems to capture every whisper of wind, crackle of broken twigs and ruffle of waves across a placid lake.

A good deal of the film rests on the performances of the two newcomers.  Julia Jedlikowska invests Luna with a burning ferocity. She has all the temper and sense of injustice of a teenager coping with her transition to adulthood and with a mother that couldn’t possibly understand what she is experiencing. Gaetano Fernandez has a natural charm and vulnerability as Giuseppe. The only misjudged performance comes from Sabine Timoteo whose severe, mannered work as Luna’s spectacularly unsympathetic mother seems to belong to a more florid horror story.

Sicilian Ghost Story is overlong and expects a lot of an audience with its challenging mixture of genres and styles but in the end it is a love story with moments that are both tender and touching. Just like Salvo, it asserts that the only true challenge to the stranglehold of the Mafia is the power of love.