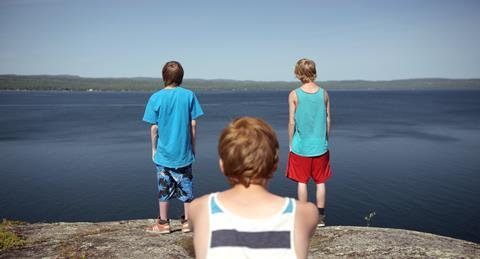 The ceaseless stupidity of men is lamented but also dissected in Sleeping Giant, a thoughtful, well-observed but also familiar coming-of-age drama. First-time feature filmmaker Andrew Cividino captures a palpable sense of place and time — specifically, anxious adolescence during the lazy days of summertime — to examine three teen boys quietly navigating the uncertain waters of encroaching adulthood. But despite its articulation of how male angst poisons plenty of interactions — whether as a teenager or older — Sleeping Giant can’t shake conventionality, the characters’ modest tensions predictably ratcheting up to something far more sinister just over the horizon.

Cividino digs beneath the surface to illuminate male-bonding rituals, especially how young men jockey for position and try to assert dominance.

Screening in Critics’ Week, Sleeping Giant will cater to art houses, with potential distributors looking to translate strong reviews into respectable grosses. There are commercial limitations because there aren’t any marketable names attached to the film, whether in front of or behind the camera, but the film’s teen-drama milieu offers an easy hook for audiences.

The film focuses on Adam (Jackson Martin), a shy, sweet 15-year-old who is on holiday in the great outdoors around Lake Superior with his parents. Adam soon befriends Riley (Reece Moffett) and Nate (Nick Serino), bad-apple cousins who enjoy shoplifting, getting stoned and daring each other to do dangerous stunts. The introverted Adam isn’t a great mix with these teen hoodlums, but a bond develops between the boys as they try to coax Adam to ask out a local girl, on whom he has a crush.

As Sleeping Giant opens, an ominous, pounding, percussive score atop images of natural beauty alert the audience that not all will be idyllic in this teen tale. Unfortunately, Cividino, developing the material from a 17-minute short he made last year, tips his hand in such a way that viewers are prepared to expect a dark turn in what initially seems like an unassuming slice-of-life film.

This certainty is only underlined by the dynamic contrast in these three boys. The ineffectual Adam can be more vulnerable around Riley, who’s not nearly as antagonistic as his vulgar, dim-bulb cousin. Hitting dead birds with tree branches and mercilessly ridiculing Adam for his perceived lack of manliness, Nate is a juvenile delinquent well on his way to becoming a psychopath. There’s simply no way that a powder keg won’t go off during the movie.

Cividino digs beneath the surface, though, to illuminate male-bonding rituals, especially how young men jockey for position and try to assert dominance. Cinematographer James Klopko documents the gorgeous water and beautiful wide-open spaces where these boys are vacationing, but Sleeping Giant consistently undercuts the lakeside eye candy by reminding us of the boys’ unfiltered testosterone, which provokes Riley and Nate to act out and impressionable Adam to follow their lead. But the teens’ foolish actions are echoed by the older male role models on display — most notably, Adam’s cool-guy father (David Disher), who in a rash moment indulges in some incredibly stupid behaviour that could have repercussions for the entire family.

Sleeping Giant seems to be drawing parallels between all these characters’ ignorant, selfish actions, suggesting that, for men, maturity is something that is never achieved. But that provocative notion is ultimately the only intriguing variation in what is otherwise a sensitively acted, fairly pedestrian story about fleeting youth and the poignancy of puppy love. Betrayals and dark twists eventually follow, but none of it is particularly surprising. Still, Cividino already has a firm grasp on the marriage between environment and tone. And his young actors deliver loose-limbed performances that feel at least partially improvised without falling into awkward self-indulgence.