Quentin Dupieux returns with a frothy, loose ode to TV superheroes of old 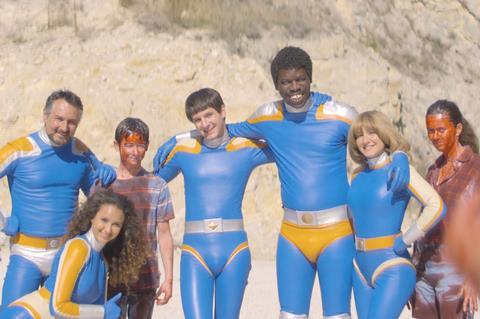 The droll, slight Smoking Causes Coughing plays like a loose collection of Quentin Dupieux’s leftover ideas, but there’s ample charm in these surreal bits and pieces — especially for anyone already on the auteur’s cheekily bizarre wavelength. Ostensibly about a team of superheroes trying to get their mojo back, this comedy quickly travels down some strange side-roads, encompassing everything from talking barracudas to a robot that gets worse with each upgrade. Anyone searching for deeper meaning is pursuing a fool’s errand — the point is to savour the oddball chuckles and head-shaking peculiarity, of which there is plenty.

Appropriately screening in Cannes’ Midnight section, the picture doesn’t have the conceptual focus of a Deerskin, probably relegating it to festival play and specialty audiences. But for those who appreciate Smoking Causes Coughing’s principal cultural reference point — cheesy live-action children’s adventure series such as Mighty Morphin Power Rangers — the wry shout-outs will be treasured.

Dupieux introduces us to Tobacco Force, a quintet of Avengers-style crimefighters whose superpowers are the individual ingredients in cigarettes, which they wield to destroy evildoers. (Gilles Lellouche plays elder statesman Benzene, Vincent Lacoste is Methanol, while Anaïs Demoustier portrays the vain Nicotine.) But after their boss, a rat named Chef Didier (voiced by Alain Chabat), decides that the team needs to go on a retreat to reconnect, Tobacco Force camps out in a lovely forest getaway, telling scary stories to amuse one another.

Smoking Causes Coughing’s first segment is a delightful sendup of those bygone kids’  television programs, with Tobacco Force decked out in ridiculous costumes battling a giant tortoise, which is clearly just someone in a cheap rubber suit. Whether it’s the intentionally threadbare puppet used for Chef Didier or the knowingly ghastly effects work for Tobacco Force’s powers, Dupieux lovingly lampoons these shows’ earnest kitschiness.

But once the team attends the retreat, the narrative shifts as we see the individual scary stories play out as distinct interludes. In one, an even-keeled young man named Michael (Anthony Sonigo) seems weirdly unperturbed by the fact that his feet are trapped in the terrifying gears of an industrial machine that could reduce him to pulp. Another tale, co-starring a game Adèle Exarchopoulos, involves a welder’s mask with the power to make its wearer feel liberated from ordinary concerns — but also makes them serenely homicidal.

These stories have very little to do with Tobacco Force — or, frankly, anything else — but Dupieux’s casual gross-out humour and deadpan visual gags give them a giddy unpredictability. It helps, of course, that his cast emulates his zany, straight-faced approach, treating each new absurdity as perfectly normal. Lellouche embodies the spirit of every blandly heroic leader of a group of superheroes, and Demoustier eagerly leans into her character’s obsession with her attractiveness, Nicotine seemingly more concerned about getting compliments than saving the day.

At a slim 77 minutes, Smoking Causes Coughing doesn’t have the space, or inclination, to say something profound about our insatiable appetite for costumed characters — or the nostalgic pleasure inherent in old-school handmade effects, which somehow made those far-out adventures seem even more magical. Clearly, Dupieux views the film as little more than an excuse for some truly groan-worthy running jokes, which are interspersed with random throwaway zingers. (Tobacco Force informs a young fan early on that they actually don’t promote smoking — just guess what our heroes do at the first sign of stress.) It’s all fairly obvious, but also pretty consistently funny.