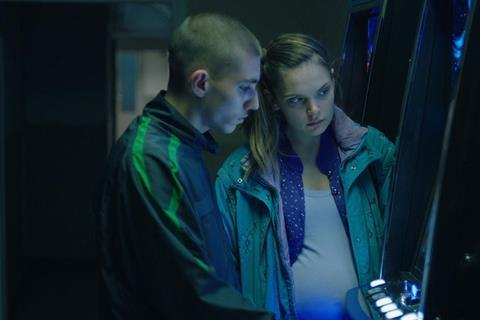 A legal loophole hitches together the lives of two young people in this economical but effective debut feature. Lena (Sandra Drzymalska), a heavily pregnant Polish girl, has agreed to sell her baby to a childless Italian couple. Ermanno (Claudio Segaluscio), the nephew of the couple, must pose as the baby’s biological father to provide a shortcut for the adoption, bypassing the laws which forbid surrogacy. Theirs is an arid relationship; Ermanno can hardly muster civility. Forced to cohabit and preoccupied with their respective pay checks above all else, Lena and Ermanno seem barely able – or inclined - to care for themselves, let alone anyone else. But gradually the permafrost between them thaws. And with the arrival of the baby, Ermanno claws back some self-respect from his habitual state of sullen worthlessness.

The birth of a child giving new meaning to life is a bit of a greeting card sentiment to build a film around, but the approach here is austere and guarded, all sparks of melodrama extinguished before they can catch light. Like Ermanno, the film tightly controls what it reveals to the world, and it’s all the more affecting for that. It’s a style of filmmaking which will likely connect with festival audiences at Venice and in what should be a healthy festival run. Arthouse theatrical interest is also not out of the question. Whatever else, this is an impressive showcase of new talent, both in front of and, in director Carlo Sironi, behind the camera.

An arresting central performance, as clenched as a fist, from non-professional actor Segaluscio, at first tells us almost nothing about Ermanno, beyond the rage that rolls off him in waves. It’s an anger which is indiscriminate – as likely to be turned in on himself as it is to erupt outwards. With drillbit eyes and a mouth clamped shut to keep in the pain, Ermanno is locked as emphatically as the apartment door that he slams between Lena and the world outside. Playing Lena,  Drzymalska exudes a placid, sometimes childlike quality which is somewhere between calmness and indifference. She’s more self-assured than Ermanno: her pregnancy affords her status and importance for perhaps the first time in her life.

The lean screenplay sidesteps exposition but hints enough for us to infer that both of these young people have known great sadness. Lena, her eyes pointedly glazed and averted from the ultrasound scan on the screen next to her, mutters that she didn’t know her parents. Ermanno, in a strained conversation with his uncle, acknowledges the fact that his father committed suicide. But the physicality of his performance – the gaunt misery of his habitual demeanour, the unexpected tenderness when he changes the baby’s nappy – speaks more articulately than any line of dialogue.

Equally expressive is the score, which uses a sawing cello motif to harness Ermanno’s churning tension as he finds himself in deep and uncharted emotional waters. Ultimately, however, it is Lena who breaks in a stunning closing scene, her composure shattered by the reality of her decision to sell her child.