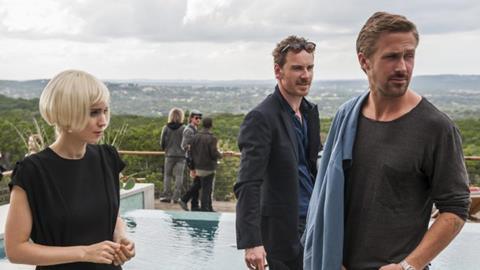 The diminishing returns of prolonged rhapsodic reverie are on full display in Song To Song, the latest from writer-director Terrence Malick. Chronicling the overlapping lives of several men and women connected to the Austin music scene, this hit-or-miss romantic tale frustrates as much as it entrances. Best appreciated as a sensory experience whose deeper meanings aren’t nearly as profound as the filmmaker and cast seem to believe, Song To Song demonstrates that Malick remains a singular artist — albeit one in a palpable rut.

Those who have tired of Malick’s voiceover-heavy, floating-camera aesthetic will find nothing in his new offering to convince them to give him another try

Hitting US theatres on March 17, this Broad Green release boasts considerable star power thanks to the presence of Michael Fassbender, Ryan Gosling, Rooney Mara and Natalie Portman. But Malick’s work caters to a small sliver of the art-house even in the best of times, and sour reviews (coupled with commercial indifference to his recent features) seem destined to quash audience enthusiasm, despite the film’s novel rock ‘n’ roll backdrop.

Song To Song examines a handful of troubled romantic relationships, particularly between aspiring musicians BV (Gosling) and Faye (Mara), who also has feelings for a cocky, well-connected record producer named Cook (Fassbender). BV and Cook form a tentative business partnership to work on songs together, but BV’s love for Faye complicates the arrangement, ultimately driving Cook into the arms of a flirtatious local waitress (Portman).

In a similar vein to his last two features, To The Wonder and Knight Of Cups, Song To Song dramatises the challenges involved in finding love and contentment in contemporary society, where superficial pleasures and material success are prized above all else.

Those who have tired of Malick’s voiceover-heavy, floating-camera aesthetic will find nothing in his new offering to convince them to give him another try. Indeed, the sameness of his highly stylised approach proves to be a major stumbling block to accessing the melancholy and loneliness of Song To Song’s characters. In a sense, the Oscar-nominated auteur has already made this movie — over and over again.

And yet, there remains just enough of the old magic to envelop the viewer in Malick’s web of poetic musings. To be sure, the characters’ confessional narration remains impenetrably humourless. (Faye, typically apropos of nothing, declares at one point, “I never knew I had a soul. The word embarrassed me.”) But if Song To Song never comes close to matching the hypnotic grandeur of The Tree Of Life — Malick’s high-water mark for this kind of spiritual-seeking solemnity — he and long-time cinematographer Emmanuel Lubezki continue to adorn their movies with sufficiently stunning, emotionally evocative images to leave audiences with a shallow, comforting feeling of blissed-out wistfulness.

Also helpful is Malick’s glomming onto Austin’s music scene for his film’s setting. As he did with the movie industry in Knight Of Cups, Song To Song barely scratches the surface of what’s interesting about this creative world, merely using it as a launching pad for intimate, electric visuals in which the central characters’ romantic travails take place amidst the euphoria of concerts and parties. (Real-life musicians such as Patti Smith and Iggy Pop come and go through the meandering narrative, adding some verisimilitude that’s largely decorative.) With a soundtrack that supplements Malick’s usual selection of classical compositions with tunes by Elmore James, Bob Dylan and Lykke Li, Song To Song feels slightly more grounded than his usual twirling, weightless concoctions.

It’s not a surprise that the cast members mostly have to fend for themselves, their gorgeous, sad faces supplying the entirety of their characters’ gravitas. Still, Fassbender animates his formulaic soulless-executive role by flaunting his sex appeal and gregariousness. Gosling’s placid expression suggests unknown depths that the movie never plumbs. As for the female leads, Malick elicits impressively sensual performances, leading to some of the sexiest moments in any of his films — although, admittedly, his freeze-dried tableaux undercut the eroticism. That spark is crucial especially for Mara, whose big eyes are used beautifully in Song To Song, even though Malick never sees the character beyond being a cutesy waif in search of a direction.