‘Soul Of A Beast’: Locarno Review 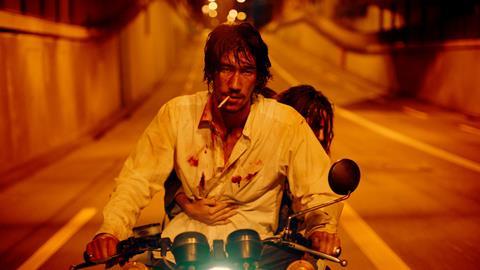 ‘Soul Of A Beast’

The sedate streets of Zurich become a phantasmagorically stimulating hipster metropolis in Swiss multi-hyphenate Lorenz Merz’s assaultively stylish Soul Of A Beast. A belated follow-up to his award-winning, freewheeling road-movie 2013 debut Cherry Pie, this tale of early fatherhood and doomed young love set against a vibrant multi-racial, multi-cultural backdrop certainly ranks among the more dynamic contenders for this year’s Golden Leopard at Locarno. Further festival berths will doubtless follow for a picture which, with slick marketing, could connect with late-teen and twentysomething audiences in multiple territories.

At its best a giddily intoxicating experience

Such promotion should emphasise the presence of key supporting player Tonatiuh Radzi, a newcomer discovered via street-casting (a feather in the cap of casting-director Rhea Plangg). Radzi exudes old-school movie-star charisma as Joel, the lanky, tousle-haired and fashionably-attired best pal of protagonist Gabriel (Pablo Caprez). Merz, ever-fond of quoting cinematic forebears, at several junctures shows cigarette-puffing Joel riding a scooter through a road-tunnel — a heavily-underlined reference to Wong Kar-Wai’s Fallen Angels (1995) and its iconic star Takeshi Kaneshiro. Fast company for a screen debut, but Radzi has sufficient aplomb to justify such comparisons.

Radzi’s presence is a double-edged sword, however. The picture only really comes alive when he’s on screen, and the long stretches of his absence drag down a production which struggles to justify its 110-minute running time. The bulk of the picture is dedicated to the personal and romantic travails of the relatively inspid Gabriel, who raises his young son Jamie (Art Bllaca) solo despite being barely out of his own teens (Merz reportedly drew heavily upon his own life-story for such details).

Gabriel has a stormy relationship with Jamie’s affluent mother Zoe (Luna Wedler) and after meeting Joel’s girlfriend Corey (Ella Rumpf) a classic and thorny love-triangle quickly develops. All of this plays out amid a context of escalating oddness and quasi-apocalyptic histrionics. Several wild animals are on the loose in the city, sparking nightly curfews and noisy blowback from agitated Zurich youth (captured in scenes of pummelling, repetitive intensity via Merz’s caffeinated approach).

The free-roaming creatures, including the giraffe which Gabriel regards as his ’spirit animal’, escaped as a direct result of the central trio’s mescaline-fuelled nocturnal excursion to their compounds. The increasingly surreal directions taken by the plot can be explained and justified by Merz’s framing device: the film begins and ends with images of four sleepers in a bed, implying that everything between could be interpreted as a dream — possibly wish-fulfilment by Gabriel. And as an immersion into the sensual and sensory worlds of an urban European skater-boy experiencing a sweltering summer during the third decade of the 21st century, Soul Of A Beast is at its best a giddily intoxicating experience.

Working with Fabian Kimoto on the cinematography (executed in the trendy 4:3 Academy ratio) and Noemi Preiswerk on the editing, Merz punctuates his film with a string of bravura, kinetic set-pieces designed to show off his own skills and the toothsome charms of his leading trio. Especially in the second half, however, a sense of diminishing returns sets in: there’s little that’s particularly fresh about Merz’s snazzy approach to shooting and cutting, which are redolent of fashion-world advertising and music videos. And while he has a considerable eye for images and a great ear for music — a soundtrack-compilation would have definite commercial viability — these are counterbalanced by his deficiencies on the screenwriting front (handled without the benefit of collaboration.)

Minor affectations abound. Jamie is cute; he’s also a mute — latest example of cinema’s bizarre fascination with characters who elect not to speak. The wordlessness of this kid is, bizarrely, never once remarked upon, and in the final reel it turns out that the little moppet is actually capable of speech. So why deprive him of language up to this point? Is it somehow connected with Merz’s distracting decision to post-synch much of the main character’s chat? (Rumpf’s lip-movements often don’t match what we hear.) The dream-narrative framework can of course be cited as a catch-all excuse for every baffling or unsatisfying detail, including the fake-looking animatronics deployed for a fatally wounded giraffe Gabriel encounters in the hallucinatory latter stages.

By this point the disoriented lad has taken to wandering backwaters of Zurich accompanied by his son, carrying a sharp-bladed samurai katana in a back-scabbard — a nod to Japanese manga/film series Lone Wolf and Cub. Adding further to the east Asian vibe, at several points aphorisms are intoned in gruff Japanese by veteran Yoshi Amao: bons mots which sound impressive but on closer inspection express little. Such touches are typical of a film which strives so very hard for cinematic panache and youthful brio — altitudes of cool which only Radzi manages to truly attain.