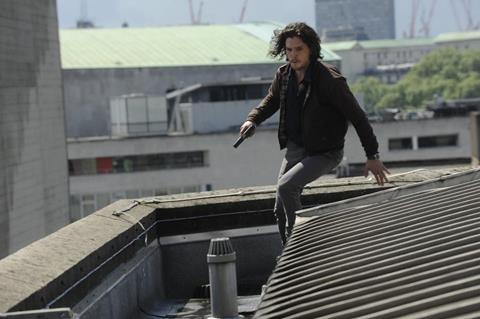 From James Bond to George Smiley, back-stabbing British spies have opened a rich commercial seam for film-makers as they photogenically ply their end-of-Empire tradecraft in the shadows. Fox’s very modern TV show 24 sprung from this vein, and was enthusiastically co-opted and beamed back to the UK by the BBC in Spooks, a BAFTA-winning TV show which ran for 10 series (from 2002 to 2011).

Writers Jonathan Brackley and Sam Vincent get a little bogged down in the internal Secret Service, Tinker Tailor-style treachery and Nalluri instead focuses on locations and atmospherics

Set in a goldfish bowl office in Thames House called “The Grid” where paranoid agents double-crossed each other with reckless abandon on a weekly basis, Spooks took an average 6m viewers in the UK and was syndicated to more than 25 countries (although it never quite stuck in the US). Irresistible figures for a big-screen outing, it seems, and the TV series original director Bharat Nalluri has added a marquee name to the bill with Kit Harington (Game of Thrones).

Spooks: The Greater Good adds little to the pantheon of films made from British TV series, however, from The Avengers to 2012’s remake of The Sweeney, which took $7m at home. Sold by Altitude, it never quite makes a grand case for its big-screen transfer, although this is a glossy affair with nice production values and, as with Testament of Youth, Harington is far more fluid and watchable than Game of Thrones or Pompeii might suggest. Going out in the UK on May 8, it may prove a stop-gap for those who can’t wait for Bond’s Spectre in November; certainly, its London sets and set-pieces are impressively staged.

The TV series Spooks came into its own in the febrile wake of the 2005 London bombings, and the film has a similar focus on foreign terrorists intent on doing damage to Britain’s institutions, which are also being undermined by duplicity within.  Spooks: The Greater Good presents a compromised secret service which is under threat of being handed over to American intelligence overlords. This rattles head of counter-terrorism Sir Harry Pearce (Peter Firth, star of the TV show) on a far deeper level than the bland beardy terrorist of Middle Eastern origin Qasim (Elyes Gabel) who wants to blow up the Houses of Parliament.

When Qasim is sprung from custody during a bungled handover, MI5 chief Dame Geraldine Maltby (Jennifer Ehle) calls in the services of loose-canon decommissioned agent Will Holloway (Harington) to find the terrorist and Sir Harry, who has faked his own suicide and is mounting a renegade operation.

There’s not much more to propel Spooks: The Greater Good through a modest 102-minute running time. Writers Jonathan Brackley and Sam Vincent get a little bogged down in the internal Secret Service, Tinker Tailor-style treachery and Nalluri instead focuses on locations and atmospherics, from a rather improbable chase through Heathrow Terminal 5 to Brixton Market, the South Bank and on to Alexanderplatz in Berlin. There’s a keen sense of life in London – it rains, and the agents get stuck in traffic jams and underground car parks before missing train shuttles. But the endless infighting and intrigue in MI5’s glossy D-section is never as compelling as the film-makers imagine, especially after David Harewood’s politician makes an abrupt exit.

Apart from the location work, which shines, technical credits are TV-smooth. Spooks: The Greater Good functions more as a comeback-calling-card for the small screen, however, than a big-screen event, although it may sit well beside the box-set on sell-through.