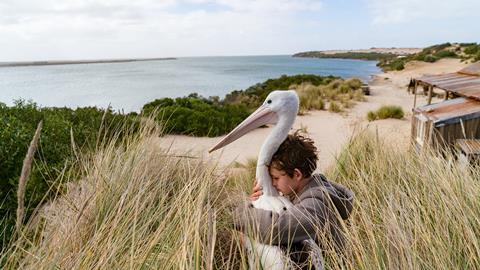 The tale of a boy and his pelican best friend remains as tender and touching as ever in Storm Boy, the second adaptation of Colin Thiele’s Australian children’s book of the same name. While a new version might not strictly be necessary, this film hits all of the earnestly heartfelt beats when it flies close to the crux of its Australian Film Institute Award-winning 1976 predecessor. When director Shawn Seet and screenwriter Justin Monjo insert modern context to the main narrative, however, the Jai Courtney and Geoffrey Rush-starring family-friendly drama becomes less effective.

Storm Boy’s lengthy flashbacks never feel like a straightforward rehash of the initial film, which has long been an Australian primary school mainstay

With Sony releasing the film in Australia on January 17, and Good Deed Entertainment taking US rights for an expected spring North American release, Storm Boy faces a hurdle more problematic than any adjustments to the beloved coming-of-age story: the prominence of Rush among its cast. Also one of the movie’s executive producers, the actor continues to make newspaper headlines due to accusations of inappropriate behaviour across his theatre career, the latest pre-Christmas wave of which will still be fresh in the minds of the movie’s local audience.

In world-weary mode, the Oscar-winner spearheads Storm Boy’s contemporary-set segments as Michael Kingley. Grandfather to the teenage Maddy (Morgana Davies), and director of a company he founded which is now run by his son-in-law Malcolm (Erik Thomson), he’s summoned to Adelaide for an important board vote. The matter at hand is the leasing of Western Australian farmland to a mining company, the subject of a passionate family dispute. Malcolm wants Michael’s unwavering support, while the spirited Maddy — who will join the board in a year upon turning 18 — staunchly opposes the move.

At its core and at its best, the film journeys to the 1950s, and to a coastal stretch of South Australia’s Coorong National Park. Relayed as a youthful memory shared with Maddy, it’s the tale of a pre-teen Michael (Finn Little), his reclusive fisherman dad ‘Hideaway’ Tom (Courtney), and the three pelican chicks the boy adopts after hunters kill their mother. With guidance from another of the isolated region’s reclusive residents, Aboriginal man Fingerbone Bill (Trevor Jamieson), the newly nicknamed Storm Boy lovingly nurtures the birds he dubs Mr Percival (after Lord of the Flies), Mr Ponder and Mr Proud. The first of his feathered friends becomes his constant companion, as well as an unlikely saviour in times of trouble, but the gun-toting threat to the reserve’s wildlife never dissipates.

It’s to director Seet (Two Fists, One Heart) and writer Monjo’s (Jungle, Spear) considerable credit that Storm Boy’s lengthy flashbacks never feel like a straightforward rehash of the initial film, which has long been an Australian primary school mainstay — and that, with the heartstring-tugging dialed up gracefully yet noticeably, it strikes such a sincere emotional chord. Such is the resonance of the bond between boy and bird, however, re-entering the framing storyline proves an unwelcome diversion. Stellar animal wrangling, engagingly vivid performances from Little (Tidelands) and Jamieson (Boys in the Trees), and an internalised portrayal by Courtney all assist, while a brief cameo from the original Fingerbone Bill, David Gulpilil, is a deft touch.

From the scenic cinematography of the Coorong’s beach, grass and sea expanses by Australian television veteran Bruce Young, to the gentle score by Alan John (Holding the Man), solid technical credits impart Storm Boy with a warm, sometimes wistful sheen. Of course, the affecting central tale manages that feat anyway. Though less subtle in its contemplation of environmental devastation, coping with loss and change, and letting go of the ones you love, this four-decades-later remake still flaps its way into viewers’ hearts like its intrepid pelican hero.

Screenplay: Justin Monjo, based on the book by Colin Thiele