A return to Grey Gardens, comprised of footage shot by Peter Beard and Lee Radziwill 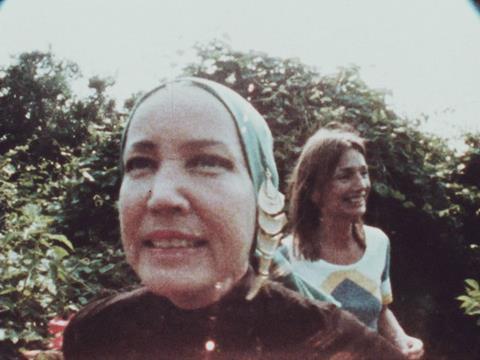 Before Albert and David Maysles gained entry into the weed-choked grounds of Grey Gardens, another film project captured the eccentric mother and daughter, Big and Little Edie Beale. The film, by the artist Peter Beard and the Beales’ cousin Lee Radziwill, aimed to explore the evolution of the Hamptons, and was abandoned early on. The footage, long believed to be lost, was recently rediscovered. And these four reels of Bouvier Beale antics, bookended by a commentary by Beard, form the basis of this sporadically intriguing, but ultimately unsatisfying film.

It’s a little like Big Edie’s mantlepiece – there’s undoubtedly some treasure there, but it’s buried by stuff that probably should have been chucked out.

The ongoing fascination with Grey Gardens and the two women who lived there, surrounded by memories, paranoia and cats, is a key selling point for this film (a Berlinale-premiering re-edit of a version shown at Telluride in 2017). The mini industry which has spawned an off-Broadway musical, an HBO film, a drag parody, a documentary follow up (Ghosts Of Grey Gardens, 2005) and a Marc Jacobs handbag suggests that the appetite for the Beales is not yet sated. That said, the fact that the material came to light when Albert Maysles asked for permission to use it for DVD extras is telling – this doesn’t entirely work as a self contained entity; the interest and value to audiences is mainly in the background detail it gives to the story of Grey Gardens. The cult status of the original film should ensure some theatrical interest, however this would be best suited to programming as part of a double bill.

The Maysles brothers were hired as crew on the aborted project, which was spawned during the summer of 1972, when Beard and Radziwill met in Montauk, Long Island. An ad hoc creative community had built up there in a beach house. Super 8 footage captures various Factory members frolicking on the beach, and Warhol himself, looking perplexed and somewhat disgusted by the close proximity of nature. In a present day section at the start of the film, Beard flicks through a scrapbook of his art, listing luminaries – Bianca and Mick; Truman Capote. It’s tempting to assume that all these people passed through the house during this summer, but, since he also namechecks “the biggest rhino I ever saw”, that might not be the case.

But the real meat of the film comes once all the names have been dropped. The Grey Gardens to which Beard and Radziwill gain access is even more dilapidated than the house in the Maysles’ film. The walls are streaked with mould, the ceilings have caved in. The cellar, as Little Edie points out coquettishly, contains hundreds of bags of cat food tins and faeces. East Hampton’s environmental inspectors tut their way through the building on a regular basis, bullying the Edies with threats of eviction. So, funded by the deep pockets of Aristotle Onassis, an emergency program of renovation is undertaken. Meanwhile, the camera scopes the teetering piles of detritus, roaming restlessly through the building like one of the Bouvier Beale cats. Little Edie seems equally daunted by the mess. “What are you looking for?” barks her mother. “The same thing I am always looking for,” she says plaintively, “Either my pants or my makeup.”

Director Göran Hugo Olsson (The Black Power Mixtape) treats the material as an artefact, letting it play out without edits, or clips from elsewhere. The problem with this is that it also leaves the film without a strong directorial voice. Ultimately, it’s a little like Big Edie’s mantlepiece – there’s undoubtedly some treasure there, but it’s buried by stuff that probably should have been chucked out.