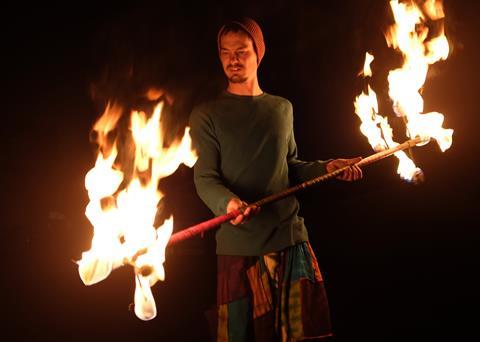 The mystery surrounding the disappearance and death of a young man is explored but not exactly solved in this somewhat heavy-handed documentary which reveals a double life, possible culpability on the part of a college campus police force and a host of unanswered questions in a quiet North Dakota town.

The Dakota Entrapment Tapes takes on a lean, open-ended true crime story. It’s a poignant tale, with affecting contributions from dead man’s parents. Directed by Trevor Birney, who produced Alex Gibney’s No Stone Unturned, the film seems designed to tap into the current interest in the true crime format, but lacks the clear cut resolution which ties up the most satisfying of the genre.

Offer police officers considerable financial motivation for making drugs busts, and they will find some drugs to bust, one way or another.

The Sadek family are farming folk who live a life which is “both calming and stressful” on a ranch which borders a lake. But, as we soon learn, they have been disproportionately touched by tragedy. Their oldest son, Nicolas, died in an unexplained accident on a level crossing. The younger son, Andrew, a reserved boy with a gift for electronics, left for college where he found a close-knit group of friends and seemed to thrive. But on May 1st, 2014, he disappeared. And approximately two months later, his body was found – he died from a gunshot wound to the head and was wearing a backpack filled with rocks.

The university campus police, out of their depth handling the investigation, hastily ruled it a suicide. His parents vehemently disagreed with the verdict and, at their behest, a journalistic investigation revealed that the same campus police had recruited him as a confidential informant. He was required to wear a wire and set up drug deals; in return they promised to make his relatively minor marijuana charges go away.

Was Andrew collateral damage in a war on drugs playing out in a community which was, in fact, relatively untouched by narcotics? Certainly, whether he committed suicide or he was murdered, the fact that he was strong-armed into working for the police is the likely reason. The film questions the wisdom of a law enforcement agency which operates in much the same way as a commission sales gig. Offer police officers considerable financial motivation for making drugs busts, it says, and they will find some drugs to bust, one way or another.

It’s a potent core argument, but the filmmaking around it can lack focus, not helped by an overbearing score. Interviewees drift off topic or repeat themselves. Sweeping drone shots of North Dakota’s scenery, the recurring motif of a freight train and the slow motion shots of a sauntering moose drain momentum. Anecdotes about amateur fire juggling are included, and provide a reason to include footage of pyro-performances, presumably symbolic of Andrew’s short life.